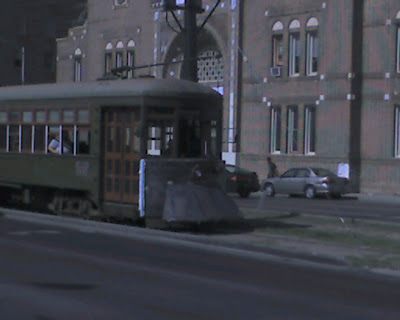 Looks like one of the streetcars from the collision that was pressed into service with some box steel and plate steel armor. Looks like a cattle pusher. 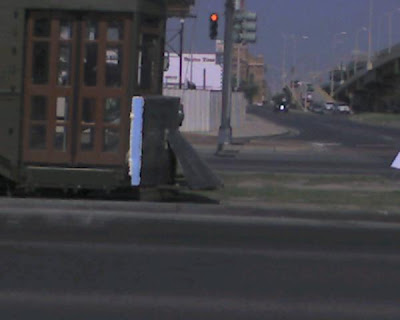 How'd you like to look out your side mirror and see that barreling down at you? My favorite streetcar driver before the storm used to take his streetcar and gently nudge cars blocking the tracks with the little 4" rubber bumper on the front, all the while screaming, "move that buggy!" I can only imagine the destruction he would reap in this beasty.

UPDATE- And on the way home from work today, a pickup truck decided to pick a fight with a streetcar: 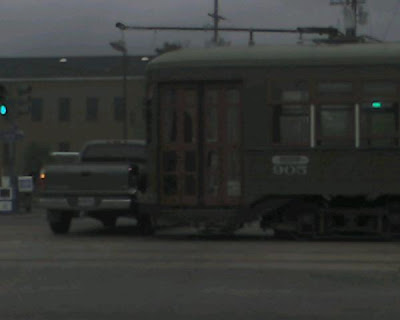 A while back, everyone got all in a huff about lead and drug-laced Chinese-made toys. Everyone wondered what the hell was going on in China. And then of course, everyone forgot about it and moved on...

I just wanted to take a minute to share a few stories that have been forwarded to me over the past few months. I work in heavy industry, so equipment has to be of the highest quality. When it isn't, shit blows up and people die. Here are two stories of why the only thing made in China on some of the jobs I work on are the workers' underwear. 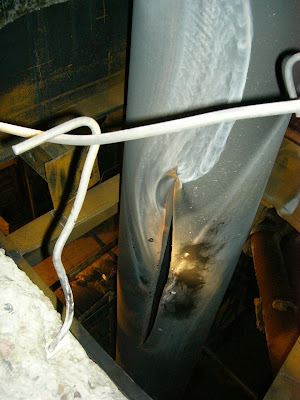 This photo is from a pressurized steam line in a powerplant. Most heavy duty seamless piping is made in a handful of mills in Japan (largest source), South Korea, and the United States. The pipe had documentation that said it was made in the USA. After it was installed and the plant was in operation, the pipe blew up killing 2 workers and injuring many others. 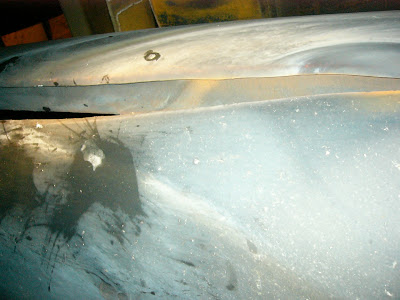 Insufficient weld penetration along the seam of the seamless pipe was the cause. Upon investigation, the pipe was made in China while the documentation was forged. Several important tests were either ignored or forged by unscrupulous brokers. Last I heard, the Chinese government was still trying to hunt down the last of the brokers.

The next story comes from a pressure vessel explosion. Pressure vessels are important pieces of equipment in many industrial processes. From boilers for heating, to cracking vessels, to separator vessels, making a large steel jar that can hold in all the pressure is extremely important.

Back in the late 19th and early 20th century, boiler explosions were common. Gradually, engineers learned their lesson and now all pressure vessels are manufactured to a common code put out by the American Society of Mechanical Engineers (ASME). ASME Boiler Code spells out ever little detail. It's thicker than a stack of Bibles. I wouldn't be surprised if the proper procedure to break wind around the vessel spelled out. 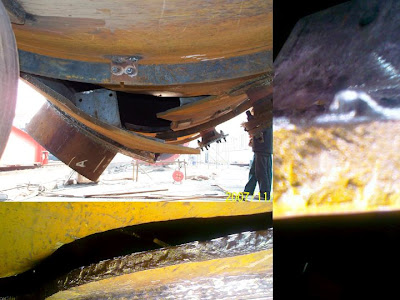 This is one vessel that failed in spectacular fashion. Nobody was injured (they were testing the vessel before shipment). Instead of bending, the steel just snapped with a ragged edge. That's a BAD sign. Steel is supposed to fail in a ductile (bending) fashion, not brittle failure (just snapping with no warning). No material testing (Charpy, etc.) was done on the steel during manufacturer. ASME boiler code wasn't consulted during the manufacture of this vessel. The foreman and his workers just built the vessel off the top of their head.

This is stuff that's almost unheard of since the 1930's. These are just 2 samples of failures I've gotten in my inbox in my time as an engineer.

Disturbing stuff from the country that's supposed to be "the next hyperpower." I think China has a lot of potential, but count me underwhelmed.

NOTE- Edits for grammar and clarity.
Posted by Clay at 3:52 PM 4 comments:

Protesters shot like dogs. This has the potential to be China's Abu Ghraib. Just imagine once those memory cards start getting smuggled out of Tibet... On the bright side, China's in the midst of their own Sexual Revolution.

Federal Reserve was looking out for little guy with Bear Sterns deal. Most of the commentary of the Bear Sterns deal is negative, but here's an articulate contrarian view. Even if you don't agree, the article is good food for thought.

Why the Dollar is so cheap. "When George Bush was inaugurated, the euro was trading at 94 cents and gold cost $266 an ounce. Now they are trading at $1.52 and $985 an ounce. That is a plain vote of no confidence in the Bush­Bernanke economic model."

How desperate are some people for gas money? Wait until $6 a gallon...

Iraq War coverage disappearing. With China/Tibet/Olympics, Iraq, Presidential Race '08, and Oil/Economy/Recession there should be no reason to spend any time on Britney Spears...

Huckabee defends Obama on Fox News. Pretty classy of Huckabee. He's a real likeable guy and it's not fake. I don't think he'd make a good president, but he's a genuinely good person. Oh yeah, here's Obama's 2002 speech opposing war with Iraq. Amazing that this was delivered in 2002!

History's Greatest Replies. Churchill kicked some serious ass. He has a few entries.

Lord Black goes to the slammer. LOTS of gloating by the writer.

AIPAC on trial. There's a joke in the military that if the US ever went to war with Israel, Congress would pass funding for Israel before it did for the US military.

Did humans and chimps interbreed? Hey buddy, your great-(x30)-grandmother fucked a monkey!

And one last link:
Ugly the Cat. Uplifting story. End on a happy note.
Posted by Clay at 8:43 AM No comments: