An eccentric mayor that actually gets shit done!

The Culture of K-Ville. From AlterNET.
Posted by Clay at 6:22 PM No comments:

One of the oddest things that's happened to me because of Katrina is I've gotten on this Zombie-fiction tear.

I've seen the classics (Romero's Dawn of the Dead, Land of the Dead, etc.), I've seen the new ones (Resident Evil and 28 Weeks Later), and I've read Zombie books. In the past year or so, I've read Day by Day Armageddon (written by a serving member of our armed forces), World War Z, and I'm working on Monster Island. I guess it's the whole deserted streets/end of the world thing that ties into Post-Katrina New Orleans that gets my attention

Anybody else have odd reading interests as a result of Katrina?

So, after all my reading, I come upon this video and it really catches my attention. I come to find out that Scopalamine is actually real, too! Watch out!
Posted by Clay at 5:58 PM 4 comments:

New Orleans is filled with great restaurants, but the cheap places are getting rarer and rarer. Here are a few that are still easy on the wallet.

Rose Nicaud - Frenchman Street next to Snug Harbor/Marigny - One of my favorite coffeshops. They stop serving food at 2 PM. Great Panini. Also, try anything with veggies in it.

UPDATE 2- Also want to tack on Mojo's. It's right next to Fiorella's (a great all-around restaurant) and is mostly a bar, but they've got pretty good sandwiches, melts, quesedillas, and salads. Try the pasta salad.
Posted by Clay at 5:27 PM No comments:

Survivorman takes his family off the grid


Les Stroud (Survivorman) takes his family off the grid, a special from OLN. He wants his a Walden Pond for his family. Fascinating from both a technical perspective and social perspective. It's interesting to see how his children react to the whole mess. Also, the video shows everything that unfolded, warts and all.
Posted by Clay at 8:24 PM 3 comments:

Labels: environment, nature, off the grid

Most mainstream journalists either can't or won't do their job. There are a few decent journalists, like Brian Williams and Garland Robinette, but he's overwhelmed by an army of Katie Couric's, Sean Hannity's, and Rob Couhig's.

If you know where to look, though, you can still find great journalism. There are certain traits that they all hold to: very smart, very direct, and all know the powerful effect of humor. I'm going to label this the "Wise Guy" school of journalism. Here's my list of Wise Guys:

Michael Lewis. He's the first one to really break into the mainstream with Liar's Poker and Moneyball.

The eXile. A magazine founded by Mark Ames and Matt Taaibi (see below) for expats in Russia. Never had to worry about libel, so they had complete and total freedom. While Taibbi moved on, the eXile still turns out a quality product. Scathing and real.

Matt Taibbi. Nobody represents the "Wise Guys" more than Taibbi. A literary decendant of the Gonzo journalism movement, he fashions himself as a modern day H. L. Mencken.

Dave Zirin / Will Leitch/Deadspin. I'd heard of Zirin before Rising Tide, so he's not just on the list for that. I also suppose I could put the whole Gawker group (Wonkette, etc.) in there as well.

The Beast. The American version of the eXile. They have to watch what they say far more than the eXile because of libel laws, though.

I'm also going to say that Jon Stewart and Stephen Colbert are intellectual cousins of the Wise Guys, so I'll include them on the list, too.

There you have it. This is the cream of the crop of modern journalism. One can only hope someone from the networks reads this and gives one of them an anchor chair.
Posted by Clay at 5:40 AM 10 comments:

Also, "America's Wetlands and You":

I just discovered that Mike Judge (the dude behind Bevis and Butthead, King of the Hill and Office Space) created another movie. I didn't know about it because the studio (Fox) didn't spend 1 penny on advertising. In fact, they tried to kill the project at every turn. I liked Judge's stuff, so I decided to give Idiocracy a try.

The movie is loosely based on The Marching Morons, but it also covers corporatism and American pop culture as well.


When I watched it, you could tell they had a genius concept on their hands, but Fox (being Fox) did everything in their power to kill the project from the moment they were handed the first script. The movie is pretty low-budget and it shows. Painfully, sometimes. The movie isn't very tight and could use a better editor. The whole movie is also a bit short. All in all, it's a great concept that was successfully killed by Fox. The skewering that Fox News gets, though, almost makes up for it.

It's worth a rent. If you've got Netflix, definitely add it to your list. Wouldn't buy it, though. The quality just isn't there. 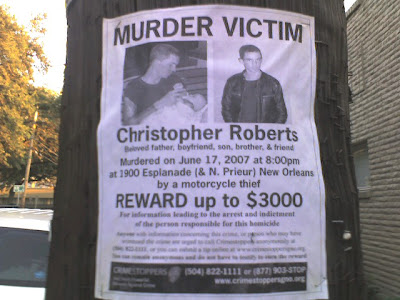 Seen in the Marigny.
Posted by Clay at 9:04 PM No comments:

Creationism/"Intelligent Design"/"Teach the controversy" is nothing more than a ruse to get Christianity into schools. That's not a revelation. It's a flagrant violation of the separation of church and state and should be defeated on that grounds, but that's not the reason this really gets under my skin.

Whenever society faces serious problems, politicians love to point to new technologies to solve all our problems, from biofuels, to immigration, etc.

Politicians have good reason to trust in technology. Science has come to the rescue many times before. Look at Norman Borlaug and the Green Revolution. Everyone was predicting global catastrophe, mass starvation, and a massive "die-off" of humanity. Thomas Malthus couldn't have written more dire warnings. But none of it transpired because science rode to the rescue. Science fed the world. With current technology, you could probably feed 7 billion people (although distribution would be problematic).

I have a feeling in the not too distant future, we'll have serious challenges on the order of the Great Depression. Exactly what it will be, I'm not quite sure, but it's coming. I do know that people will look to science. There have been numerous calls for a "Manhattan Project" to solve America's dependence on foreign oil.

I've got a dirty little secret for anyone out there: there's a nation-wide shortage of engineers. We don't have enough engineers to keep our current infrastructure going, much less expand or evolve. Currently, the US aerospace, nuclear, oil and gas, mining, and US manufacturing (or at least what's left) sectors are all running full-bore and they can't hire enough engineers to do the projects they want. Also, companies are just starting to get hit by a wave of retiring baby-boomers, which will only accelerate this trend.

Want coastal restoration? There's no way the Corps will be able to tackle coastal restoration without a massive infusion of talent. They don't have enough engineers to do all the project on their plate. I was talking with 5 employees from the Corps at a party and I mentioned I just graduated from Tulane in Mechanical Engineering and they fell over each other to ask me if I had a job yet and wanted to work for the Corps (sorry guys, too late).

What's happening to all the engineers? In the past, the US could import engineers from Eastern Europe and India, but that isn't happening this time for 2 reasons: 9/11 and visa problems and growing prosperity abroad. While there was a surge in enrollment in computer science during the .Com boom, American-born students aren't enrolling in engineering in large enough numbers. Engineering curriculum is, by and large, harder than business or law [put on helmet and prepared to be bombarded by bricks from lawyers]. We have lawyers and MBA's out the wazoo, but not enough engineers. Business and law also have the draw of quick money, while engineers make good money, there is a glass ceiling and engineers rarely strike it rich.

Houston is getting hit especially hard. I know a few engineers over there and what they've told me is people are taking advantage of the shortage by moving from firm to firm to ratchet up their salaries and companies, flush with cash, desperate to keep projects going, are all to happy to ante up. Every month or so, some engineers move on for a dollar or two more per hour.

Who is addressing the shortage? To date I have not seen one meaningful plan to address the problem. Nobody in local industry put up a fight when Tulane eliminated engineering. No local leader called Cowen on his bullshit. I was a student then and it was depressing.

When we really, really need engineers, we're going to find the cupboard bare. That's what scares me. And that's why Vitter and creationists must be defeated.

UPDATE- Importing Science Talent. From CNN Money talking about H1B Visas. Anyone got any experience and opinions on H1B's? The only expertise on this sort of stuff are the foreign workers offshore.
Posted by Clay at 12:49 PM No comments:

My Super Sweet 16 Lands Daddy in the Slammer

"My Super Sweet Sixteen" is one of the worst shows on television. It's part of the reason the terrorists hate us. It's a bunch of spoiled little brats getting obscene presents.

Fortunately, someone upstairs noticed one episode. Check out the video.

Apparently, Daddy's oil company was missing 19 million dollars. One of the investors saw the show and called the SEC. Daddy's little princess had to give it all back in restitution. Oh, what I wouldn't give to see the look on her face when repo men came for her beemer!
Posted by Clay at 6:01 AM 1 comment:

Wha cha gonna do when they come for you!


Our non-registered sex offender Senator!
Posted by Clay at 5:53 PM No comments:

Don't blog on too many national scandals, but this was pretty amazing.

So, a pedophilia scandal sweeps Capital Hill, everyone speculates on who might be involved, Larry Craig issues a denial (just to be on the safe side)... What year is it?

The title sort of gives it away...

In the words of Jeanette Maier, "Do you really think [Vitter] became a trick when he went to DC!?!?"... Larry Craig has had secrets to hide for years... Mark Foley gave really creepy speeches about congressional pages... Lest you think I'm being partisan, everyone knew about Morial and while few people know O.T. was a crook, lots of people knew he had a gambling problem. AND NOBODY IN THE MEDIA EVER DECIDED TO GET OFF THEIR FAT, LAZY ASS AND INVESTIGATE! Could it be that certain members of the media have mistresses? Like a certain star at a certain local TV station that is now giving WWL a run for its money... I'd say more, but then I might get sued (or at least kicked in the balls by a certain anchor's wife).

My point is the "Tribune of the People" is asleep at the wheel/passed out drunk/hiding behind the skirts of hookers/peeing in their pants in fear (circle all that apply). Pathetic. That's the REAL reason bloggers are so popular.
Posted by Clay at 6:51 PM No comments:

Here's the homepage of the Stinkin' Linkin.

Wish I had heard of this. I would have loved to help them out. I will try and show up on Friday and give them a good sendoff. I was actually tempted to run for Council at Large, but I decided against it. Instead, I'm going to make a contribution to the Stinkin' Linkin fund Friday.

Deadspin's season preview. The Editor of Gawker wrote it. Couldn't they get Supasaint to do it?

I'll be at Cosimo's tomorrow enjoying the game. Hope to see y'all there!
Posted by Clay at 6:25 PM No comments: