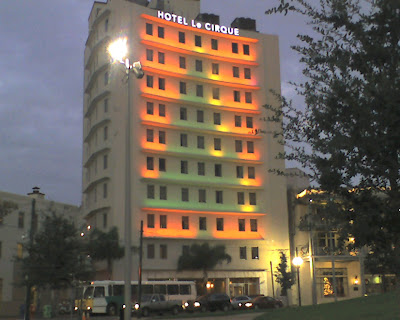 And now kicking off for the Saints...

Tony Amato being run out of KCMO Schools?

Tony Amato, the former superintendent of Orleans Parish Public Schools, is in the news again in Kansas City.

Amato was just about the only guy that got favorable treatment in Left Behind, the Story of the New Orleans Public Schools.

From what it looks like to me, he's trying to be run out of town even though he's done good by the students. I have a sneaking suspicion that these allegations are nothing more than an excuse to get rid of him, just like in New Orleans.

UPDATE- A local a local reaction. Looks like my initial feelings were correct.
Posted by Clay at 8:45 PM 2 comments:

3 Sets of Heroes and a Crooked Bastard

6 injured in crew boat accident. Have no fear, the Coast Guard is here. This could be me one day, so kudos to them.

NO Firefighters Going Home. Reconstruction of the New Orleans Firehouses thanks to volunteers and the Leary Foundation and others.

How black children see whites. Repeat of the famous bobo doll experiment that led to desegregation.

Jason Berry's Gambit cover story about William Jefferson's career. In the end: "[After being confronted with evidence by the FBI] Jefferson reportedly sank back on his couch and uttered the words that could become his political epitaph:

What a waste indeed.
Posted by Clay at 6:44 AM No comments:

One of the big questions about the subprime mess (and going all the way back to Enron) is, 'Where are the bond rating agencies?'

Well, here they come. S&P has downgraded hundreds of SIV's [Structured Investment Vehicles]. SIV's are bundled debt packages that frees up capital for other uses. Or at least, that's the idea. SIV's were used by Enron as part of their scheme to keep a bunch of debt off the books. It's also one of the things that makes the subprime mess so dangerous. The subprime loans were packaged up, shipped off and nobody know who holds them now.

Income servicing debt [Chart]. Here's a chart that you can scare people with. Remember, consumer spending by those in this chart is a scarily large part of the global economy.

Alexander Hamilton's America. Skip past the first third or so of the article to get to the good stuff.

Now and Forever. Paying for Iraq. Youngsters who were just starting high school when the U.S. invaded Iraq are in college now. Their children, yet unborn, will be called on to fork over tax money to continue paying for the war. More from Vanity Fair.

"Friction and fractures erode faith in Mitchell's investigation. Damn. I take my hat off to Howard Bryant. You've just written the best sports journalism article of the year.

The Mitchell investigation is MLB's official investigation into the Steroid Era. It's due later this week. A lot of hardcore fans, including myself, are eagerly awaiting its release.

It's basically Selig's chance to save his reputation and he's not doing so well so far. He appointed someone with a good reputation, but some serious conflicts of interest.

Bryant's article rips the Mitchell report a new one (before it's even released!). He looks like he's got some great sources for this stuff. He even brings up a big skeleton out of Selig's closet: the sale of the Red Sox to Larry Lucchino's group. That business deal was corrupt to the core and even Selig's cronies defrauding a charity whose most high profile activity paid for treatment for cancer patients (especially children). Nice one Selig! Those baldies weren't going to use that money for long, anyway! I hear William Jefferson has a job offer for you, if he stays out of prison... Anyway, the deal was crooked to the core and should have gotten Selig axed.

Even if you're not a baseball fan, you can see some good journalism by clicking the link.
Posted by Clay at 7:48 PM No comments:

It looks like you need to take a break from your bar exam prep to give Jay Arena another ass-whupping.
Posted by Clay at 6:37 AM 4 comments:

Really cool. Really lifelike. From the makers of the Furby. Pretty neat from a technical perspective, but I'm interested in it from a psychological perspective. What I find interesting was my reaction to this: Video of Pleo getting tortured to death. It's only a machine. It doesn't have feelings. It didn't actually die. It could even be fixed. But, you sort of empathized with it's "suffering." Odd. Check it out and tell me what you think.
Posted by Clay at 7:44 PM 1 comment:

Hillary had a plan to win the presidency: Raise a shitload of cash (Check). [Women used to earn 68 cents for every dollar a man made... Now Giulliani is making 40 cents for every Hillary dollar...] Get an early lead (Check). Spread a "media narrative" about being the inevitable candidate and having things locked up (CHECK!). Keep Bill mostly stashed in the background to keep from overshadowing your campaign (Check). Stay ruthlessly on message (until recently, check). Stomp on your opponents windpipe until their body stops twitching (Oops.)

Tack on stories about how she'll kill the campaigns of Blue Dog Democrats, like Mary Landrieau...

Hillary Clinton is doing everything wrong that she used to be doing right and as a result, we get to enjoy reading things like this:

..they have exposed Hillary as a New York Yankees-style villain who buys all the best players but seems to resent having to actually win it between the lines.

Matt Taibbi rips on Hillary. Read the entire article. It's well worth it.

Oh yeah, even though it isn't baseball season and this has nothing to do with baseball: FUCK THE YANKEES! Just had to shoehorn that in there.
Posted by Clay at 7:19 PM 2 comments:

News buffet is open. All you can eat.

LifeStraws. A year supply of potable water in your pocket. I've heard the new version even eliminates the iodine aftertaste. This is the sort of down to earth engineering we need much more of. A great emergency preparation measure. Just imagine the suffering in Africa and elsewhere a few million of these could alleviate. They're cheap to produce and relatively easy to distribute. I'd imagine they could have saved quite a few lives in the aftermath of Katrina.

A lot of politicians are praising ethanol as the solution to Global Warming/Dependence on Foreign Oil (pick your party line). Ethanol: Dangerous Delusional Bullshit. WSJ article on Ethanol. I like the quote, "Ethanol is for drinking, not driving." There's an important distinction to make, though: current forms of corn-based ethanol are wasteful, while sugarcane-based ethanol has been viable for at least a decade. The most positive scientific report I've seen on corn based ethanol has it as a slightly positive EROI (energy return on investment). I'd say the majority, though, say it's either a wash or a waste. Nothing any politician says will ever override The Second Law of Thermodynamics.

Sugarcane-based ethanol, however, is economically viable and was part of how Brazil (along with major investments in offshore oil and energy conservation) became energy independent. What makes sugarcane-based ethanol so great is you get to use the bagasse from the crop. Given Louisiana's large sugarcane industry, there are some real business opportunities here.

CNN: The Corrupt News Network. Kudos to the LA Times. Remember, it was CNN that gave you the steaming pile of dog poop that was Crossfire (which also gave the world Tucker Carlson). Fox News, to a larger degree than some people seem to think, is more of an evolution of CNN than an out of the blue creation by Rupert Murdoch.

Speaking of Fox News, they give the smackdown to Rove on his historical revisionism on the leadup to Iraq. The blind squirrel finds yet another nut. I've noticed some actual quality journalism on Fox News every once in a blue moon. I'm thinking Fox News, being a business first and a propaganda outlet second, might be hedging it's bets on a Democratic 2008 Tidal Wave.

91% of Americans think they'd have a higher quality of life in Canada. They're forgetting about 1 thing: WINTER! Well, if Global Warming takes hold, I just might move to southern Canada and be happy.

Ending Famine, Simply by Ignoring the Experts - New York Times. Don't listen to the Chicago Boys if you want to feed your country.

politics: My generation(18-24) needs to take the election back from their genertion (65+). Interesting discussion on Reddit.

Apple hits record 6.81% market share with indications that might be low. I'm a proud member of that 6.81% for almost 6 years now and no regrets.

The battle for brainpower. King Abdullah of Saudi Arabia, the country that sits on 25% of the planet's oil, knows that oil is not his country's future. That's why he's spending $12.5 billion to found a graduate research university, which he'll endow with $10 billion - as big an endowment on day one as MIT has built in 142 years. The point of this project, on a grand scale even by Saudi standards: to attract the best researchers in science and technology.

Nigeria has more oil than any other African country but can't keep the lights on because of violence and corruption. Sad, but true.

"This time, market players seem truly horrified — because they’ve suddenly realized that they don’t understand the complex financial system they created." Krugman on the Subprime mess. How bad could the subprime mess get? Well, one could look at Detroit's Housing Apocalypse for a real nightmare scenario. $250 for a house. Estimated note of $1.

More financial news here. US Citizens thinking about leaving the US and more on the subprime mess. A good quote: “With someone like HSBC throwing in the towel, going for transparency… it makes Citi and the other parties look conspiratorial at this point if they don’t ‘fess up and do that.”
Posted by Clay at 5:42 PM 1 comment: