This was on the cover of the paper recently:
New $1.1 billion hurricane levee proposed for New Orleans East Land Bridge


I expected a bit better writeup on this very important project.  It's a large levee proposed stretching from New Orleans East to Slidell.  It will have gaps in the channels at the Rigolets, but will have options to install gates at a later time.

Note that the gating of the mouth of the lake has been proposed on numerous occasions in the past.  Proposals go back at least 40 years.  It's back under discussion, partly because of Isaac's LaPlace flooding. Here's a letter to the editor shortly after Isaac calling for the gates.

Putting in the levee along the old St. Bernard birdsfoot is a pretty low-risk, moderate-reward project.  In fact, it was even called for in the Corps' original 1962 plan for hurricane protection levees around New Orleans, but was shelved for a variety of reasons including cost.  So long as you maintain sufficient gaps for normal inflow and outflow, there's very little impact on the lake, although there's not as much of a mitigation against storm surge.  The natural tendency is to want to gate off the final gaps, but that could cause problems.

The first issue is flow.  Lake Pontchartrain is really more akin to a tidal mudflat than a traditional lake.  There are MASSIVE inflows and outflows in that lake on a regular basis.  Even without hurricanes, the tidal flows through the Rigolets can reach ~6-8 knots.  That's really moving.  Any gated structure will mean a choke point which will increase the flowrate much higher.  That means the structure will be very, very vulnerable to scour and undermining.  Here's an illustration of scour at the Rigolets: 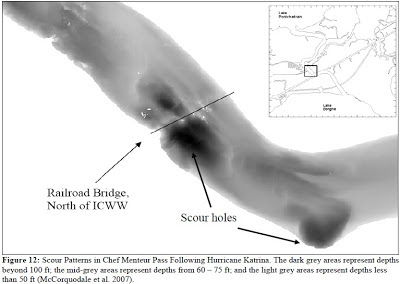 This is a trestle bridge that supports the CSX line that runs along the Gulf Coast.  The pilings interrupt the flow and cause major scouring in the vicinity.  Note that scour very nearly destroyed the Corps-built Old River Control Structure in 1973, partly due to a design flaw:
In 1973, a large flood tested the ORCS to its limits.  Huge scour developed underneath the large steel pilings which anchored the structure to the river bottom. The structure was almost swept away, and emergency concrete was poured into the holes as a kind of large Band-Aid.

Any gate structure in the Rigolets would have to cope with similar, powerful scour effects.

The other problem with gating the Rigolets is backside flooding.  You'd think that if you just built a giant plug, well, that'd solve all your problems, right?  Like putting up a giant dam, no storm surge could enter and no flooding would result, right?  Not quite.

A term used in physical oceanography is "Fetch".  Fetch describes how wind (even very weak wind) acting over a large enough surface area begins to build up waves and surge.  Isaac, despite being barely a Category 1 storm, covered a very large surface area.  Despite they eye hitting Port Fourchon, I had friends in Charleston, SC lose power from the outer bands of the storm.  Despite weak winds, they were able to act over a large area and build up a pretty impressive surge, as anyone in Braithwait or LaPlace can tell you.

How does this relate to gating the Rigolets?  Well, let's suppose you had a continuous, 50' barrier keeping the mouth of the lake plugged up through any and all hurricanes,  you still have the surface area of Lake Pontchartrain that the wind can act upon.  The lake is ~24 miles wide by at least double that width in the other direction.  The surface area of the lake is ~630 square miles.  Even if you have a weak wind, it has enough surface area to act upon to still make a significant surge.  Even if you have gates, you'll still need levees around the edge of the lake!  Gates alone are not enough.

Purely fetch-driven surge in Lake Pontchartrain can pile up to 6 feet+ on the Lake (Source: Ed Fleming at a presentation I attended).  Furthermore, that surge can be driven North, South, or West, depending on the direction of where the hurricane hits.  For example, a hurricane that hits Morgan City has a north-east quadrant that would drive storm surge to the Northshore.  A hurricane that hits Bay St. Louis would push surge southwards onto the lakeside levees of Jefferson and Orleans Parish.  Note that there are no Federal flood protection levees anywhere on the Northshore and, while they have been authorized for LaPlace, no funding has ever come forward to actually build them.*  Getting around to building more levees, given current rigorous standards, could be pricey.

My main point is this is a levee project to pay particular attention to.  Especially if the gates are added later as an option.  Gates will have some tricky design challenges and are not a panacea.

_____________________
* There was a letter to the editor by David Vitter (note: dead link) where Vitter slammed the Corps for not building the LaPlace levee that was authorized after extensive study in ~1992.  Umm... The Corps is a creature of Congress.  It does what Congress funds.  The LaPlace levee was authorized in ~1992, but wasn't funded.  Who was in charge of securing that funding?  Maybe a politician that's been there representing Louisiana for a decade plus as a Representative and Senator?

Another sidenote: We also need to kill the whole "blame New Orleans levees for Braitwhite/LaPlace flooding" thing.  This was studied and debunked before the levees were built.  They've gone back and double checked it, and sure enough, the New Orleans levee improvements had negligible effect on levees in LaPlace/Braithwhite. UPDATE- This is the link to the Corps study stating the NOLA Levee improvements had no effect.  More here: New Orleans Levees Hold, and Outsiders Want In.


UPDATE 2- I'll just add the recent Bob Marshall Op-Ed about updating the bird's foot to save the coast and help the port here.  Worth a read.

There's a great little movie that came out a while ago called "Contagion".  It's about a modern pandemic outbreak (a la the Spanish Flu of 1919).  Turns out, the MEV-1 virus is based off a real virus:

Nipah virus is an active virus.  It's had multiple outbreaks, some with dozens of fatalities (very high mortality rate; easily communicable), and there's still no vaccine or cure today.  And it's still out there today.

Discussion of Contagion by epidemiologists

What's interesting about epidemiology is it's a never ending battle.  You have to constantly be on your toes, because viruses mutate over time.

One of my favorite parts was where one of the scientists working on the cure talked about Dr. Barry Marshall, who drank an infectious broth to prove his theory was correct. That's a pretty amazing way to put your money where your mouth is.

First Saints game in person since my dad brought me when I was a little kid. Then, I got to watch the 49ers destroy the Saints.