Some thoughts I want to keep and not get lost down the Tweeter tubes:

* QOTD#1: "In New Orleans, everyone has a hustle."
* The "Petri Dish" metaphor is good and applicable to both the journalism and education 'reform' initiatives.  Good job whoever came up with that one.
* Very good steering of panels.  Panel discussions were well directed and no eyes were gouged or blood was drawn.
* Great job getting more coffee early this morning.  It was sorely needed after the previous night.
* IMHO, the weakest panel was "Oil and Water".  Not a lot of new ground covered.  It could have been better and I think the parenting panel drew a lot larger crowd than they were expecting.  Also should have set out to at least discuss Bayou Corne (w/o the audience asking a question).
* Great term: "Nuisance Complainer"
* Karnofsky and Louis Armstrong: http://t.co/jc6pdFNB
* Tulane got their butt kicked by Ole Miss http://t.co/hD5aKELV
* Here's Bob Marshall's Op-Ed about subsidence from earlier this week: http://t.co/zpfF0fuh
* Another bid issue nobody brought up is the complex litigation related to Macondo is actually limiting how much research gets published.  See here for a sample: http://t.co/G0Elc2m3
* Not mis-allocating the BP Spill money was mentioned as an afterthought.  We could have spent a panel on just that.
* Cenlamar has #standing, even when #seated.
* All this discussion about the Times-Pic is like a funeral.  I'd rather spend a little more time chatting about what The Advocate is doing.  Also, the only one with any energy is Jason, who's been up since dawn setting up and managing the webstream for Rising Tide 7.
* Nola.com writeup of the Education Panel. 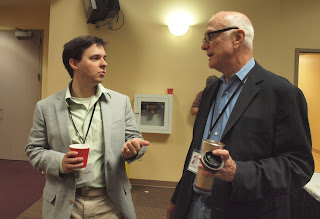 Debating with my old professor.  Thanks again Susanna.

Note: Some updates and edits.

Schedule Here.
Posted by Clay at 9:30 AM No comments: