Finally got some work done on the truck. The weather if finally starting the behave for the first time in over a month. It's been either too wet or too cold to work (paint doesn't stick well below about 60 degrees). The truck hasn't fared exceptionally well in that time, either. The water pump has continued to rust and leak away, there's still a slow drain on the battery, and I left some tape on there and it bonded to the paint and I ripped off some new primer when I went to remove the masking tape. Oops.

The motor mounts are ancient and they rubber is as hard a rock, so I decided to change them out. 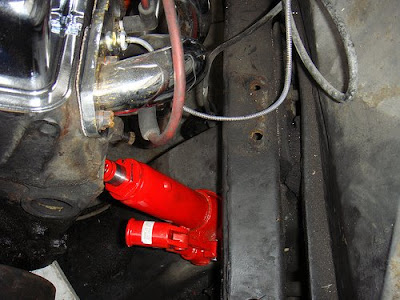 I took the pressure off the mounts by using a bottle jack, undid the bolts (VERY hard to access), and removed the motor mounts. 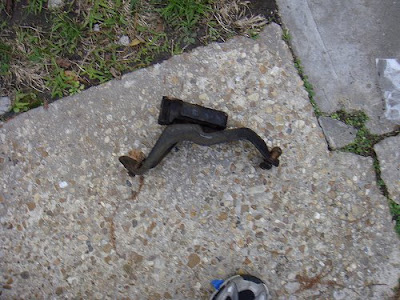 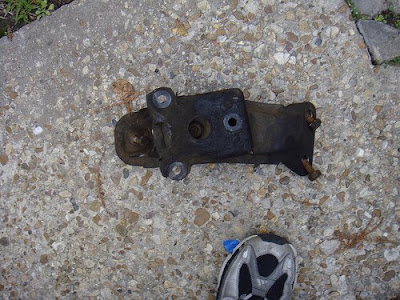 Which is a problem because this is what NAPA said a 1980 C-10 motor (donor engine) mount should look like (upper half only): 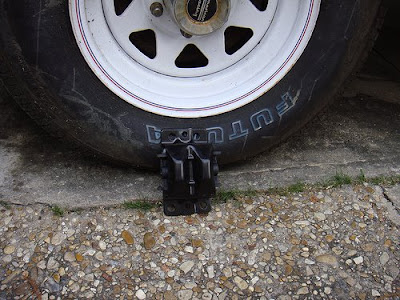 I need to go out and find the right motor mount now. Any ideas on what motor mount I should ask for? I'm pretty sure this truck originally came with a straight-6, not a V-8.

Also, FYI- a set of motor mounts should last most vehicles 100,000+ miles or at least a decade. These things are just ancient and it's one more thing contributing to the engine running rough.
Posted by Clay at 11:39 AM No comments:

Wired: Before the Levees Break: A Plan to Save the Netherlands


Incredible article about flood protection in the Netherlands. Puts our puny system to shame.

It's embarrassing to see how far we've fallen. Given how pathetic are system is, it's hard to comprehend that it was the Dutch who came here for help from a Tulane engineer who was born and raised in New Orleans.

My favorite parts are towards the end:

Applying the Dutch model of risk-based design [to New Orleans' levees] would be a political nonstarter, if not unconstitutional, and the efforts of the Army Corps of Engineers would in no time be halted by an army of lawyers.

The article is really a must-read, especially the end.

UPDATE- Meanwhile, our 100-year storm protection grinds to a halt because of lawyers.

Their thesis is white vigilante's used Katrina as an excuse to gun down whatever black people they saw.

Hands down the best local reaction: "I can't believe Nossiter didn't write this." Worth a read. Lots of horrifying shit happened after Katrina. It was a breakdown in civilization. One of the more interesting stories Dambala recounts: "I've got interviews with people on Dumaine Street who told me of a band of men (African-American) with guns, a police officer included, who were systematically hunting down drug dealers and thugs in their neighborhood and killing them."

Unbelievable attrocities happened in the aftermath of Katrina that will never fully be explored.

More local reactions: Allowed to Live: "if Alexander and Collins left Algiers Point and told their friends not to set foot in the area, they'd be allowed to live."

Jackass could have stayed in Chicago and learned the real "meaning" of the N-word just fine. The sentiments expressed in this story could have been expressed by any one of a hundred people I've talked to in my years living here. This isn't about the South. This is about America, as it always has been, as we keep saying here: Our fate is your fate, and it was, and it is. Our own."

My 2 cents: if you want to know what a race war looks like, look up the past or look up what's going on in your own neighborhood before looking down your nose at New Orleans.

UPDATE- Reserve 5 minutes of your time to read Varg's comments.
Posted by Clay at 10:27 AM No comments:


NOFD announced they were shutting down the Mid-City New Year's Bonfire.

Neighbors were aghast at the prospect of a pyromaniac-less New Year's.

After a contentious meeting, Community leaders organized... (Note Mark Folse in the photo) ...Pistolette wrote about Maoist safety-Nazi's... ... and the Bonfire is now back on. (Scaled back closer to what it traditionally was anyway) Dangerblonde has more.

UPDATE 2- Another theory on the Bonfire-Brouhaha. Vengeful Nagin?
Posted by Clay at 9:49 AM No comments:

Bush's Philosophy Stoked Mortgage Bonfire. By the NY Times. Excellent reporting. It's being billed as a devastating indictment of Bush, and while it doesn't reflect very well on him, I personally thought Paulson took it on the chin in that article.

With Stevens' Fall, a Pipeline for Lobbyists is Shutting Off. More NY Times. One lobbyist wrote, "“For those of us long on the dole, the coming reality will take some getting used to.”"

Entergy caught with hand in the cookie jar. Not a peep of this from the Times-Picayune. Entergy was caught by the state of Mississippi using the fuel surcharge line item on bills (which they are legally prohibited from making a profit on) to pad their profits. Will their be an investigation in Louisiana? I doubt it. Too many of our Public Service Commissioners like getting generous campaign contributions from Entergy.

At Siemens, Bribery was a line item. This is an unfortunate reality in many overseas business ventures. Reminds me of Enron's Dabhol Power Plant in India.
Posted by Clay at 9:33 AM No comments:

Nagin commissioned an "audit" of the garbage contracts.

Here's the Times-Pic-Your-Nose headline: "Report shows garbage billing descrepancies, but not where originally believed" A highly anticipated report intended to establish whether New Orleans' three garbage contractors have been overpaid shows that two of the vendors have been charging City Hall for fewer locations than were found in their service areas, while the company that covers the French Quarter and downtown has billed for many sites not allowed under its contract.

WWL's headline: "Report on trash billing leaves questions unanswered" The City Council received a report Monday detailing trash pickup in New Orleans and the billing practices of three different companies, but it might not give them the answers they so dearly want.

UPDATE- Further proof on why the Times-Pic headline and article are bullshit.
Posted by Clay at 6:43 AM No comments:

Greg, Oyster, Peter, and Leigh eat your heart out.

*Bonus plaything for the little ones.*
Posted by Clay at 3:25 PM 4 comments:

What's that about squares being named after him? [Video] Story here.

Also: Who throws a shoe?

UPDATE 2- Full, unedited video with more context. Bush had just finished claiming "victory" in Iraq before the shoe flew over his head.

UPDATE 3- And for his trouble, the shoe-thrower gets tortured like one of Uday's soccer players.
Posted by Clay at 1:45 PM 1 comment:

Expanding the unemployment rolls a few hundred thousand at a time...

Republicans admit they only shuttled the bailout to screw over the unions. " Senate negotiations as one last chance to bludgeon organized labor before the GOP minority shrinks " Fucking America one more time on the way out. More in the NY Times.

The quote of the day goes to the Morgan Johnson, UAW Louisiana. Speaking of Vitter's efforts to derail the package: "He'd rather pay a prostitute than pay auto workers."

Would that include Vitter paying auto workers for sex? Especially if they're named Wendy?
Posted by Clay at 11:03 PM No comments: 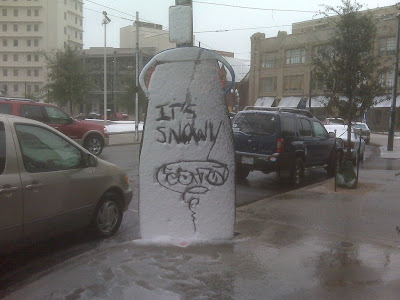 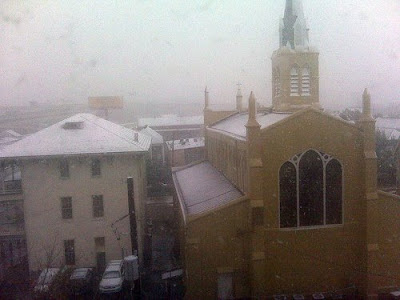 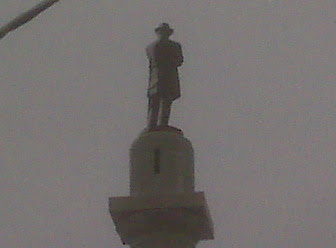 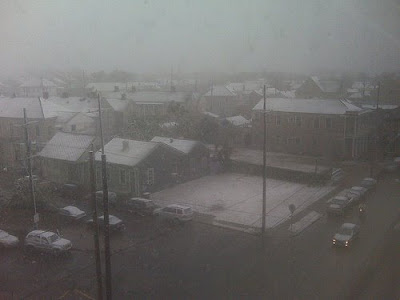 Snowing in the Lower Garden District 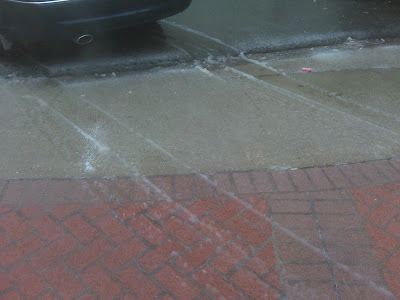 Mush. Snow and sleet and ice and water. 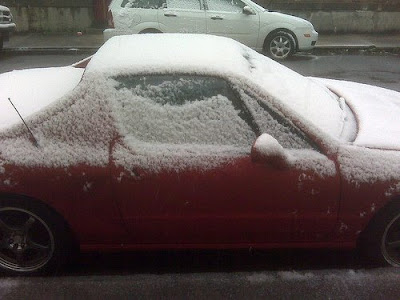 Beware the "Wrath of Khan"

Tulane's endowment looses 24% of its value. From over 1 billion dollars to $789 million. Scott Cowen running Tulane like a business (A.I.G.).

How's this for a local crime: Thibidoux woman fakes carjacking report to get boyfriend to give up offshore job. I guess she missed him too much.

Times-Pic calls Jefferson an "ineffective embarrasment." Hmmm. Will that standard still apply in 2 years with disgraced and ineffective Vitter? Speaking of the devil, Vitter thinks Cao will clean up Louisiana's image of a bunch of crooked, hooker-fucking politicians (like him).

My alma-mater, Ben Franklin High School, made the grade as one of the top high schools in the country. Go Falcons!

In Illinois, they're throwing fits over a $6 million tutoring center for jocks only. Scholarship students, work study students, etc. need not enter. Why do I bring this up? LSU's is $15 million. Speaking of Illinois, Is Chicago now officially more corrupt than New Orleans? (H/T Adam). UPDATE- It's official! We're now in a contest! Come on Nagin, get caught in bed with Veronica White and Vitty-Cent while texting Trashanova to get more blow from Bernardo! We know you can do it!

Keep this in mind as the City Council deliberates over the budget (especially if Nagin vetoes the budget): a list of political donations by the 3 sanitation firms.

New Orleans has a new congressperson. This hasn't happened since I was 6 years old.

No more $Bill and his family sucking the lifeblood out of the city. I think this kills any chance of an acquittal. Nobody is going to donate to his legal defense fund now.

Note that Malik, while he had a pretty modest vote total, did tip the election for Cao.

Joseph Cao, congratulations and good luck. Try to do what's best for the city and not what some of your backers might tell you to do. I'd love to see you get reelected.

Between Ted Stevens and $Bill, Congress just got a little more honest.

UPDATE- Oyster beat me to Holy Cao first.
Posted by Clay at 10:51 AM 3 comments:

Here are 10 cars that prove Detroit still has a chance.

Michael Moore's plan for the Big Three. More insightful than you might think at first glance. I especially like the idea of getting them involved in more aspects of the transportation system. Right now, there's a global shortage of rolling stock for railroads. I can't find the article, but I remember reading how at one point the Trans-Siberian Railway had several near-shutdowns because there weren't enough coal cars to supply the powerstations that power the cars that carry the coal! While I'm at it, I'll point out this article about electrified rail's potential in our nation's transportation system by New Orleanian Alan Drake.

Watch it while you still can!

Also, I'm reposting this because I just can't get sick of it:


GORBACHOV: THE MUSIC VIDEO - BIGGER AND RUSSIANER from Tom Stern on Vimeo.