Must have had AT&T?

Louisiana just released it's 50-Year Master Plan (the latest in a series of Master Plans... let's see if this one turns some more shovels than their predecessors).
Also, PBS has been airing "Turning the Tide", which is about Louisiana coastal wetlands. It interviews most of the scientists whose abstracts I spent last semester reading. LSU failed at turning one Tide, let's see if Louisiana can turn the more important one.
UPDATE- Just finished watching it on my DVR. Watch it here (upper right corner). Some notes: Wax Lake was open in 1941, not 1942. Also, they hold out hope that the failed BP berms will wind up nourishing barrier islands. That's news to me.
"I'm an oceanographer in water up to my knees" - Dr. Paul Kemp
Think about how important the internal transportation system that the Mississippi river provides is to America's industrial background. No other industrialized country has something as large and as economical as America's barging system. The only country that comes close is China (the #2 global economy; coincidence? doubtful...).
The Repetitive Loss issue with NFIP is problem that just begs for some sort of intervention (buyouts?).
Upcoming airings of Turning the Tide:
One note about the Louisiana coastal plan: there was plenty of data from studies of climate change, but no mention of Climate Change itself. Bobby Jindal isn't as dumb as Rick Perry, but is playing to his political base.

We cannot restore the entire coast, but we still do have a chance to save just enough if we act now. The most important thing now is to keep coastal restoration in the conversation. If we do that, funding will follow, and the engineers and scientists can take it from there.
Posted by Clay at 5:33 PM 2 comments:

It's Not Enough NOLA from Lula Fotis on Vimeo.

Put together by some current Tulane students.

Knee Down, no TD 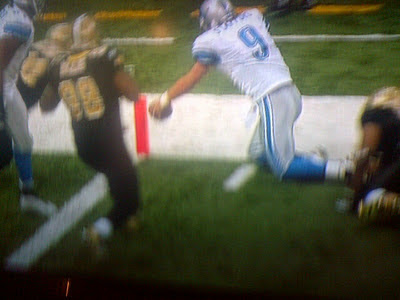 Also, thank you, Jabari Greer. You're never in the spotlight and that's a good thing. You're the best Saint ever at your position.
Posted by Clay at 10:28 PM No comments: