Crane on the skyline

Seen near the D-Day Museum: 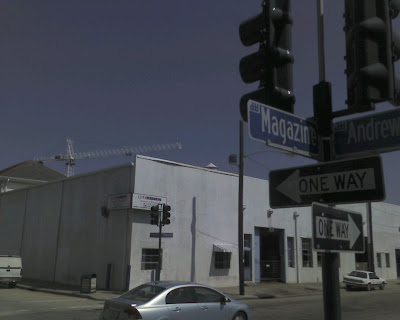 One more and Blakely's job will be finished!
Posted by Clay at 4:42 PM 2 comments:

How to Undo Propaganda

A few weeks ago, one draftsman was griping to another draftsman about how he just read in his email Obama is a Muslim and was sworn in on the Koran. Young engineer overhears, pokes head over cubicle and doesn't say anything but gives a scowl that would intimidate Darth Vader.

Young engineer gets subscription to Time months ago on a whim. Paid for whole year and is too lazy to cancel subscription, so issues pile up. Engineer gathers a stack of magazines a few inches thick and takes them to work and leaves them in the break room in order to clean up apartment. 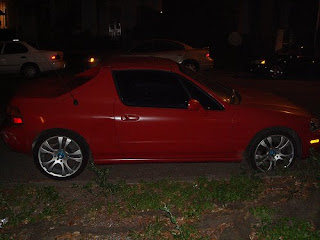 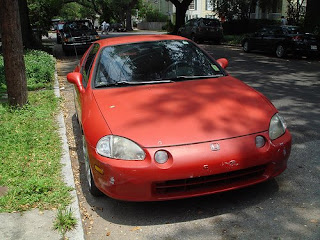 Hello. My name is Tomato.

Well, I've added another pony to the stable. This one is a '95 Honda Del Sol. Here's a great photo from Honda.

The Del Sol (also called the Civic Del Sol or CRX Del Sol) is a 2-seat skateboard with a targa-top. 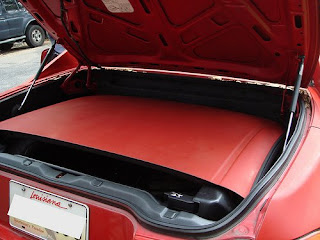 The top is made of aluminum and weighs around 30 pounds and fits in a cradle in the trunk. It's not as convenient as most convertibles, but it will do. 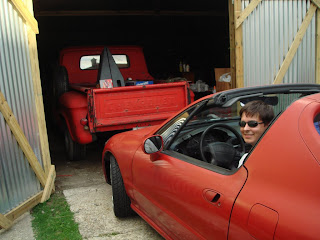 When you look up, nothing but sky

I've been learning to drive stick. I've known how for a while, but I've been getting better and better driving the Del Sol around regularly. 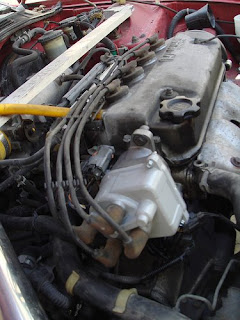 The engine is a 1.5 Liter non-VTEC Honda D engine. It's only 100 hp or so, but it redlines at 7,000+ rpm and powers a car that only weighs 2,300 lbs or so. For comparison, a truck will weigh between 5,000 and 6,000 lbs. A Prius weighs 2,900 lbs. The engineering rule of thumb is ever time you double your weight, you need to quadruple your horsepower. Even with reving the hell out of the engine while learning to drive stick, I'm sure I'm getting at least in the low 30's for mpg. 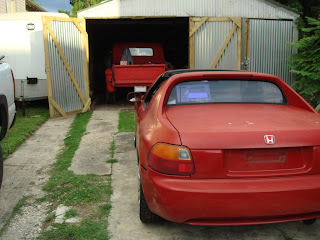 Tomato barely reaches the top of the tailgate of the truck.

Tomato is very low to the ground with stiff suspension. It doesn't make for the most comfortable ride, but it can take a corner like nobody's business.

The car has taken some abuse over the years, but it's solid and will now be well taken care of. Since it's so light, I might convert it to an electric car a few years down the road.

UPDATE- Well, I've been trying to de-rice this car and it's coming along slowly but surely. The car would be in fantastic shape if the previous owner had just left it stock. It's got new tires and rims and it's getting much cleaner.

A little wax and some elbow grease and look how it's coming along: 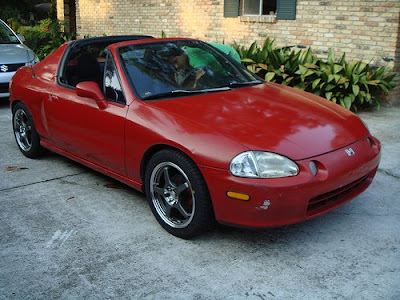 For my first tank of gas, with almost exclusively city driving and a right foot made of depleted uranium, I got 28 miles per gallon. Not too shabby for still learning to drive stick.
Posted by Clay at 10:47 PM 3 comments:

Sometimes, the posts write themselves

PINING FOR THE FJORDS!

One of the greatest comedy sketches of all time.
Posted by Clay at 4:27 PM No comments:

Tulane's Pikes in the news 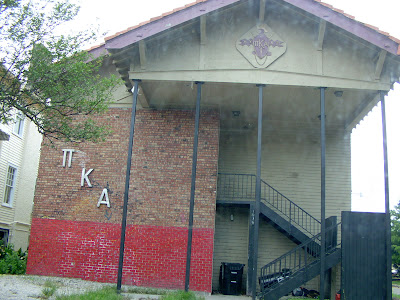 So, I heard that the pikes were under arrest, I thought 'it couldn't happen to a nicer group of guys.' They've had this coming for years. The Times-Pic has a rundown of some of their recent incidents, but I can think of far more off the top of my head.

When I was in high school, a Newman high school girl was drugged and raped by the pikes. The brothers in question never went to jail. Oh, yeah, and the Pikes still hold a Boone's Farm party every year for high school girls. Parents are horrified when they find a flyer for the party in one of their little girls' bag.

The most infamous incident happened in the late 90's. Josh Gimelstob, brother of the famous tennis player, was being issued a DUI by a cop. The Pike, drunk, lost control of the vehicle and ran over the cop and dragged the body down McAllister (the road that runs through the middle of campus). It looked like someone spilled gallons of red paint all down the street. Josh then fled the scene. Here's a steaming turd of an article about the trial hosted on the defense attorney's website. Josh got 6 months in a prison alternative program and not a single night in prison for murdering a cop! What did that do for him? Well, a few years down the road, he led cops on a high speed pursuit winding through the back roads of New Jersey at 120 mph. Cops called off the chase because of the danger to civilians and the cops, but just a few blocks down the road, they found Josh with his Mercedes SUV wrapped around a tree.

A few years later, the Pikes took a pledge on a pub crawl. The pledge died of alcohol poisoning. Cops interview the Pikes and they all keep their mouths shut. No charges are ever filed.

I forget exactly when, but the Pikes got kicked off campus, but got special dispensation from Nationals to operate without affiliation to a school. This is normally a no-no for big fraternities. A lot of national Pikes considered their NOLA brethren an embarrassment. My dad, an Ole Miss pike, detested the NOLA Pikes.

They continued to operate and were total assholes. They were also INFAMOUS for ruffieing girls, especially at their big party, Saturate. Dues for the Pikes ran something like $5,000 a semester and none of it went towards keeping the house up (TOTAL dump). It all went for beer and coke.

When I was at Tulane, a student body president campaigned to get them back on campus, arguing it's better to have an in-house problem than a loose cannon. The Hullabaloo and a large group of Newcomb students RAILED against the idea as a disaster waiting to happen. I'd love to see some of those editorials they ran reprinted in the Times-Pic. Cowen, despite his general hatred for the Greek system, gave the move his tacit approval. He had struck up a friendship with some large-donating Pike parents back in 2002.

Did the Pikes behave once on campus? Nope. If anything, they got worse. They started picking fights with other students. The date raping of girls got worse (if that was even possible). There was a large sign that read, "RAPE FREE ZONE" in their frat house that was considered a joke. Anyone who didn't think the Pikes were a ticking time bomb was either a fool or a liar.

I have one piece of advice for the Pikes. Before you go to Central Lockup, you might want to get a tattoo on your butt: 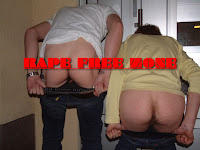 Full disclosure: I was a close friend of Ducky Riess (who ran the fraternity system at Tulane for 50+ years, although not the more recent years) and I was a fraternity member at Tulane.

NOTE- Some minor edits for spelling.

UPDATE- Didn't really want to write a new blog post about this, but had a couple of quick things to say. First off, it's sad that the Times-Pic put this story on the front page 2 days in a row when there were murders and shootings and real news happening all over the city. Second off, after all the rapes and hooliganism, it's a couple assholes who wanted to join these assholes that shuts them down. Rape? Murder of a police officer? Eh. Pouring crab boil on the genitals of a rich, white asshole, SOUND THE ALARM! 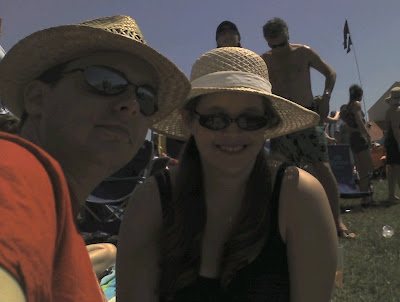 Straw hats kick ass. You may now continue what you were doing. 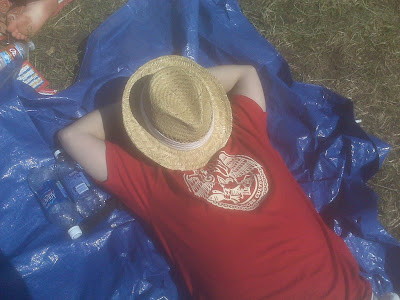 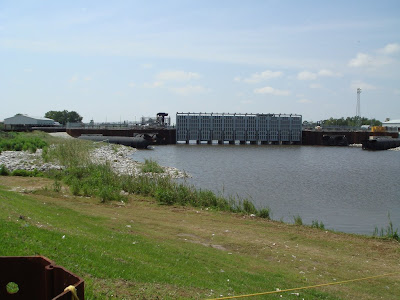 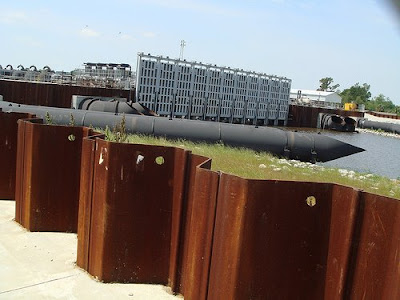 London Avenue Hurricane Protection Gate- Lakeside
So I find myself out by UNO with some time to kill, so I decided to take a stroll. I walked around the London Avenue Floodgate and took a few photos that I want to share. 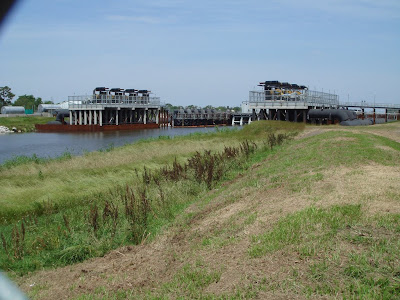 MWI pumps with booms (orange strip at bottom)
I did see one thing that had me worried. The MWI pumps (the original ones that were subject of so much controversy are still surrounded by booms. Not only are there 2 big booms across the inlet and outlet of the canal, but each MWI pump has it's own boom surrounding it. This suggests that either the MWI pumps are STILL leaking hydraulic fluid or the operators are less that fully confident about them. 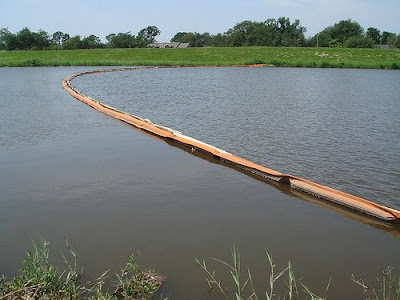 Boom on canal side of gate
In fact, I might have noticed an oil slick near one of the booms. It was a very bright day, so I can't be 100% without taking a boat to the middle of the canal, but I think I observed an oil slick caught in the apex of the curve of the boom. 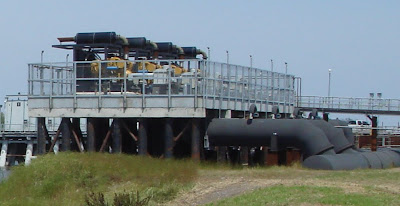 New Pumps
The new pumps look like everything is in order and lined up how it should be. The new pumps are made by one of the largest, most reputable pump companies (Gorman Rupp? Milton Roy? Anyone help my memory? I forget which off the top of my head).

You can check out the rest of the photos here. I've added a few notes, too.
Posted by Clay at 2:07 PM 1 comment: