A post that combines the Hostilidays, Poker, and foolishness, all in one.
Posted by Clay at 9:51 PM 1 comment:

Iran Going for the Gold

Iran seizes Nobel Prize. You know, there's one other time when someone tried to steal a Nobel prize. The Nazi's desperately needed gold for the war effort and went hunting around the Neils Bohr Institute, but all they could find were jars of chemicals. An enterprising young physicist dissolved the gold medals in Aqua Regia. The gold was precipitated out and recast after the war. Note to the Iranians: you don't want to have lists of things in common with the Nazi's. Don't know about the Nazi's? Well, I'm sure David Duke would be happy to enlighten you: 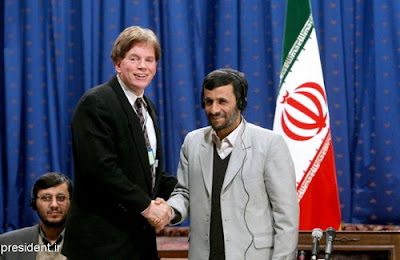 David Duke and his brah Mahmoud Ahmadinejad
Posted by Clay at 9:14 PM 2 comments:

Adrastos started it off. Maitri and Leigh have followed in the war, so now unleash the artillery:

Stacy Head running again. Thank you, Tracie Washington! She would have retired if it wasn't for the stunts that were pulled on her. They pissed her off big time. There's also a pending pay increase for the office (see, that's how politicians should go about pay raises). She defeated longtime $Bill crony Renee Gill Pratt. Pratfall was known for having the intellect of a tomato plant (check out some of these AZ posts for some damning quotes) and assumed $Bill would just make it happen for her without any work. Oops. She was booted out of office and will soon be in the Federal pokey.

We'll see who runs against Head and if Head can beat a real challenger.

Stacy Head skeptics can at least take comfort in a kickass punk song.
Posted by Clay at 9:17 PM No comments:

Chalmatians and 9th Warders have their day in court

"In a landmark decision, a federal judge has ruled that the Army Corps of Engineers' failure to properly maintain a navigation channel led to massive flooding by Hurricane Katrina" from WDSU.

Here are a few notes and thoughts:

From the CS Monitor:

"The government's primary defense is that what we did, it did not cause this, and if it didn't cause it, there is no liability," Mark Davis, a professor at Tulane University Law School, told the Monitor this summer.

The LA Times talks about the monetary award a lot. It notes it will be years before appeals are exhausted, but the compensation could total billions. Note that this ruling would only apply to residents of Chalmette and the Lower 9th Ward. Also from the article:

He called upon the Obama administration and Congress to agree to a universal settlement -- something he said the Bush administration had pledged not to do.

O'Donnell said his team had filed a separate legal action that seeks to cover those thousands of victims in a class-action suit. He noted that the federal government had agreed to universal settlements in past cases in which it had erred, including after a 1976 failure of the Teton Dam in Idaho and the 2000 Cerro Grande fire in New Mexico, which started as a federal controlled burn.

I looked up the Teton Dam failure and found a few things that interested me, like, "On Saturday, June 5, 1976, at 7:30 a.m., a muddy leak appeared, suggesting sediment was in the water, but engineers did not believe there was a problem." Also, on the cause of the dam failure (emphasis mine):

Study of the dam's environment and structure placed blame on the collapse on the permeable Loess soil used in the core and on fissured (cracked) Rhyolite in the foundations of the dam that allowed water to seep under the dam. The permeable Loess was found to be cracked. It is postulated that the combination of these materials allowed water to seep through the dam and led to internal erosion, called piping, that eventually caused the dam's collapse.

From the American Society of Civil Engineers Report on the 2005 New Orleans Levee Failures:

Today, Bureau of Reclamation engineers assess all Reclamation dams under strict criteria established by the Safety of Dams program. Each structure is periodically reviewed for resistance to seismic stability, internal faults and physical deterioration.

Gee, it would be a nice idea to try doing that for levees.

I still think this ruling will be overturned on "sovereignty immunity" grounds, but it's always nice to reinforce to the rest of the country that had the Corps simply designed and built the levees to spec, most of New Orleans' flooding would never have happened and we'd all be talking about how New Orleans 'dodged a bullet.' If you want to see a natural disaster, go to Buras, LA or Waveland, MS.

UPDATE- Harry Shearer weighs in. Oyster provides quotes from a judge with quite a lexicon.
Posted by Clay at 7:50 PM 1 comment:

"For the mayor, another tequila sunrise". James Gill's last column.

Joe Cao had to take a canoe home due to storm surge flooding. He pleads with the feds for Category 5 levees:

Note that Venetian Isles is outside the levee system in New Orleans East.

Don't forget to check out some of the latest updates from Matt McBride at Fix the Pumps.

UPDATE- Hmm. So much for the WWL embed.

For you while you're waiting on the afternoon Saints game:

An Administration Run Amok. By Clancy DuBos. Goes over the Meffert indictment and what it illustrates about Nagin's 'leadership abilities.'

What Gets Measured Gets Done. By Brian Denzer. Talks about crime, accurate statistics, and successful reform. More on NOLA Stat here.

Blakely Redux. By James Gill. The politician-skewering maestro's first column in a while gets an above-the-fold-headline in the dead tree edition and a well deserving target. Although one contributor on the idiot page disagrees with Gill's assessment of Dr. Blakely.

Deadspin- Why Your Stadium Sucks: Yankee Stadium. Yuck the Fankees.

And two final ones: The Case for Inflation vs. The Case for Deflation. Which will have a greater effect on the economy: Barack Obama "printing money" or Wall Street's financial wizardry going kablooey?
Posted by Clay at 10:42 AM No comments:

Two words: Mark Essex.
Posted by Clay at 6:33 AM No comments:

And I'm not just referring to what the Saints did to the Falcons last night.

Here's the video for full review and for handy lambasting at a later date.


WWL has a bit better rundown than the paper.