I've been thinking over the whole Deepwater Horizon/Macondo/Moratorium mess and here are a few thoughts.

The Long-string vs. liner tieback issue made no difference in the blowout and the number of centralizers had very little effect, BUT the entire episode is very illustrative of BP's management. Time and time again, BP was putting things together at the last second with little oversight on the big picture.

BP's internal emails are the most illustrative of the anarchy that reigned in BP's organization:
-------
"One of BP‘s top cement experts also described ―the typical Halliburton
profile‖ as ―operationally competent and just good enough technically to get by." - Ref. (PDF)
-------
“Are you going to fire me?” - Ref.
-------
You seem to love being the victim. Everything is someone else’s fault. You criticize nearly everything we do on the rig but don’t seem to realize that you are responsible for every(thing) we do on the rig.

You seem to think that running is more important that well control.

... (Sims, the only BP engineer with a PE, to John Guide*, - Ref.
-------
Out of all those emails, though, this pair takes the cake:
---
I believe there is a bladder effect on the mud below an annular preventer as we discussed. As we know the pressure differential was approximately 1400-1500 psi across an 18 ¾″ rubber annular preventer, 14.0 SOBM plus 16.0 ppg [pounds per gallon] Spacer in the riser, seawater and SOBM below the annular bladder. Due to a bladder effect, pressure can and will build below the annular bladder due to the differential pressure but cannot flow – the bladder prevents flow, but we see differrential pressure on the other side of the bladder.

When we displaced the riser to seawater, then we truly had a 2,350 psi differential and negative pressure. - Robert Kaluza, BP Night Company Man on the Deepwater Horizon who was on duty when the well blew, explaining the "bladder effect"
---
Mike,

When everyone was trying to get off the rig to safety, nobody had a knife to cut the painter line that connected the liferaft to the rig. The liferaft was tethered to a sinking ship, nobody could find the safety knife on the raft, and BP's "Strict No-Knife Policy" was the only corporate policy of BP's that actually worked. There have been stabbings offshore (there are some surly characters offshore), but the "Strict No-Knife Policy" is typical big company bullshit that needs to stop. Every time I've been offshore, I've had a knife on hand (Leatherman Wave).

Another thing that's disgusted me: according to the testimony of multiple individuals, the USCG-certified Master on the Horizon told other crewmembers to leave an injured man behind on the rig before he jumped into the waters alone. No way to put it nicely; that was pretty shitty on his part and I have a feeling the Coasties will string his ass up for it.

Fortunately, a few things DID actually work. There were a few individuals who really stuck their neck out, for example, the Chief Mate (who kept one of the lifeboats on the rig until it was full to capacity, despite howling protests of those already inside) and the Chief Electrician (who, along with others, rescued the injured man mentioned above and kept his liferaft from drifting into the fire).

The US-flagged M/V Damon Bankston crew really are heroes. The more and more I read about the incident, the more I'm convinced that if it weren't for their quick response, there would be more than 11 dead. The Damon Bankston also had one INCREDIBLY important tool the Deepwater Horizon lacked: a fast rescue craft. The Deepwater Horizon tagged one of their large, slow, ungainly 75-man lifeboats as their "rescue craft" (in case of man overboard, etc.). The Damon Bankston had a dedicated, quick-launching, high performance (several hundred horsepower in a tiny craft) FRC that was also capable of rescuing incapacitated swimmers in rough waters** (a capability the Deepwater Horizon lacked). Every offshore platform I've ever been on has had a FRC (and all were constructed before the Deepwater Horizon). Now, there are some differences in a platform and a DP-rig, but still, the Horizon SHOULD have been designed with a FRC, in my professional opinion.

The US Coast Guard also blasted the flag-state of the Marshall Islands for lax enforcement of standards (which also turned out to have a few holes in them). The "flags of convenience" (nicknamed "Flags of Corporate Convenience") concept has never really set well with me. What I also don't like is there's been a push to drop Panama, who has slightly increased their regulatory requirements, for countries with even less regulation. I'm especially appalled by the idea of landlocked countries (like Mongolia) regulating merchant ships. The Russians and the Chinese lately seem to like Bolivia and Mongolia for some of their merchant ships. It just doesn't seem right to have a Marshall Islands-flagged ship sitting in US waters, when the ship was had never operated outside US waters and would NEVER operate in Marshall Islands territory. Note there's a USCG-led QUALSHIP initiative to up the standards on Flags of Convenience, but I'm not sure how effective it has been. Why not just use US-flagged drilling vessels (or at least require 30% or so of them be US-flagged)? I can name at least 1 modern US-flagged deepwater drilling rig in operation.

The qualifications of the DNV experts called in to investigate the BOP vs. the qualifications of BP's experts called in to knock the DNV BOP report was interesting. The DNV experts had an incredibly impressive resume. One of the leaders had a PhD in Materials Science and Engineering from Vandy and the other leader worked on the King's Cross Investigation. The King's Cross fire was a fairly standard trash fire that suddenly and unexpectedly flashed over and killed 31 people. The ins and outs of why was new to science (the Trench Effect, related to the Coandă effect) and it was even written up in my Fluid Dynamics textbook in college. It was literally an investigation so thorough it rewrote the textbooks. BP on the other hand put up one guy who had 'a year or two of engineering school before dropping out and working on rigs for 30+ years.' The expert was also a longtime contractor, not an actual BP employee. BP's expert completely flubbed basic materials science questions (that any senior in engineering could answer) to the point where the board stopped asking him questions. The BP expert wasn't a moron and he did have some interesting points about the DNV report, but nothing that undermined the DNV report in any significant way.

The damage thus far from the Moratorium has been greatly exaggerated, but I'll still be waiting to see what happens a few years down the line. A lot of these big deepwater projects have years-long lead times. Also, note that not every permit was actually drilled in the past and there always been a flow and ebb tide with drilling. Somedays, the rig count is high and rig dayrates are on the rise. Sometimes, everyone packs up and heads somewhere else or stacks the rigs in storage. I will say that the biggest benefit of US offshore oil isn't necessarily the jobs or the tax revenue (although those are important), but the effect on the Balance of Payments. Petroleum purchases are a HUGE portion of the US trade deficit and a big drag on the dollar (on the same level as the budget deficit?). Petroleum purchases are so huge, you often see disclaimers like 'non-petroleum trade deficit' in the fine print of charts in the WSJ, etc.

There's a quote in one of my favorite engineering disasters books, Inviting Disaster by Chiles. It goes something like 'operating on the cutting edge of technology is privilege conveyed on high-tech industries and those industries must protect and nourish that trust if they expect to stay in business and not have their franchise closed after too many failures dumped in societies lap.'*** That's a lesson the offshore industry must heed, or face the consequences. More costly errors and near misses cannot continue.

** Note that the waters were completely calm the night of the blowout, but the Damon Bankston did have to fish out incapacitated swimmers, a capability the Deepwater Horizon's lifeboats would have been unable to perform alone.

I got the opportunity to be in the courtroom today. I was a little late for the reading of the verdict.

I've been thinking about it and the one thing that still makes me a little sad: out of everything Meffert, Nagin, and St. Pierre did, nothing was more evil than the Interoperability Grant.

One thing we learned from the I-35W Bridge Collapse was what a difference a good, interoperable communications system can make. Despite the fact a damned interstate fell into the Mississippi and dozens were in danger, only 13 people died. Dozens were swiftly rescued from the water by adept, well-coordinated rescue work. Minnesota had the system that New Orleans lacked after Katrina.

Of all the charges today, not a single one related to the Interoperability Grant. In all likelyhood, nobody will ever to go to jail for it. Think of the lives in Katrina that could have been saved.

"...and I would have gotten away with it, too, if it hadn't been for you meddling kids!"

Check out AZ for the juicy details from the St. Pierre trial. Some of the best blogging I've ever read.

UPDATE- Much more to read at my new favorite site, Slabbed
Posted by Clay at 11:02 AM No comments:

The end of the line for the Pike House

No more Pike rape den, a photo by Noladishu on Flickr.

The Pike rape den dies an ironic death: turned into a police station.

A picture is worth a thousand words 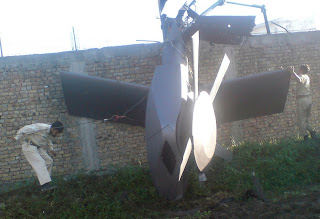 That's not the tail rotor of a Blackhawk helicopter. Backstory here, from Wired.

Top Oilfields in the US, by proven reserves. From The Oil Drum. 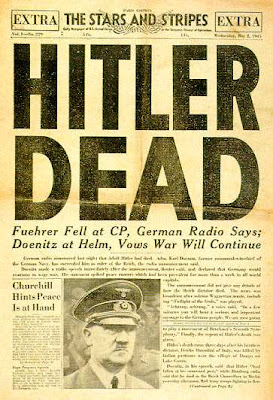