As I referenced earlier, Blum and Roberts 2009 is an extremely important paper published in Nature that deals with feasibility of rebuilding the coast. Here's a presentation I submitted to class with some notes. 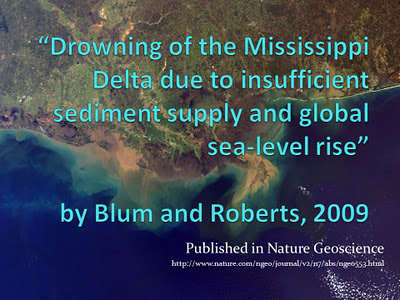 That's a really stark title for an academic paper. No messing around, just going for the jugular. 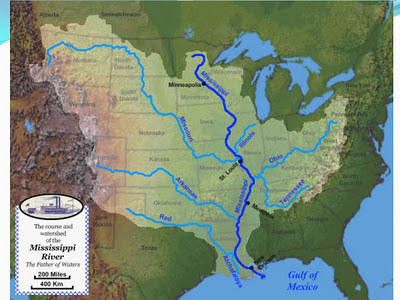 The drainage basin of the Mississippi. The sediment load basically comes from clastic deposits of material washed down from the Appalachian and Rocky Mountains.

"All these lands are drained by the Mississippi" - Armand St. Martin
Louisiana Frenchman 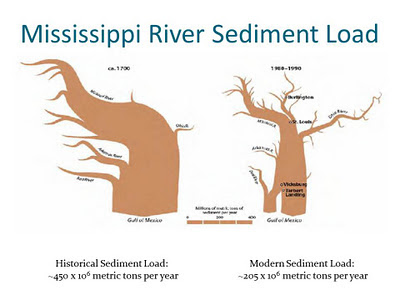 Problem is, the sediment load is not what it used to be. The main loss comes from the damming of the Missouri River. 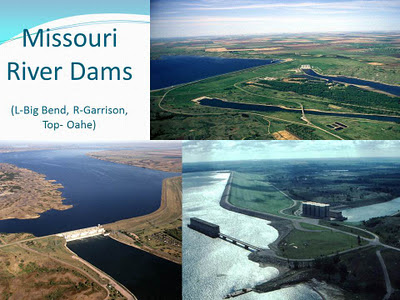 Here's a snapshot of a few of the dams. Each one pictured generates several hundred MWe's. 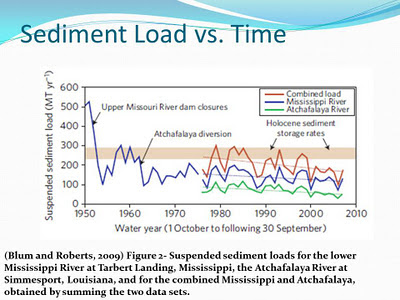 From Blum and Roberts' paper, you can clearly see the dropoff after the dams are completed. This data comes from USGS samples of suspended sediment load. Note that we're also losing the coarsest-grain sediment, which is the best at creating new land. 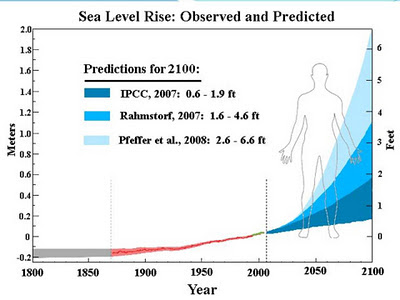 And, to make matters worse, we don't just have a choked off river and low sediment loads. We have to deal with increasing rates of sea level rise. Historical data indicates a rise of ~1mm/yr for most of the 19th and 20th Centuries. We've been increasing to closer to 1.25-1.5mm/yr since about 1970. Future projections are for a MINIMUM of 2mm/yr. There's quite a bit of disagreement on how quickly sea-levels will rise. Here's some discussion on Dr. Jeff Master's blog.

The biggest culprit in sea-level rise? It's not deglaciation. It's thermal expansion. 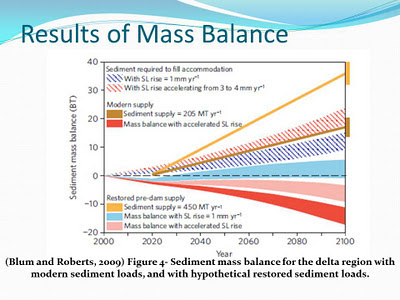 So, Blum and Roberts put together a mass balance of the sediment coming down the river and what we'd need to keep up with sea level rise. Even if we blew up every single dam on the Mississippi and unleashed the lower Mississippi, we'd continue to lose prodigious amounts of land. 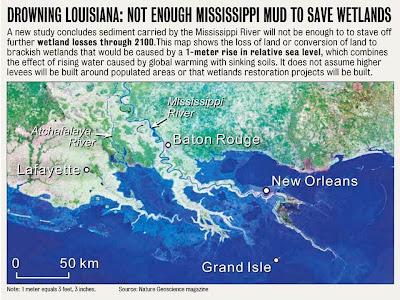 This is from the Times-Picayune writeup of the Blum and Roberts paper. Note the slide shows a "no-action" scenario with a 1-meter sea level rise (over 100 years), which is on the middle-to-upper-end of sea level rise projections. 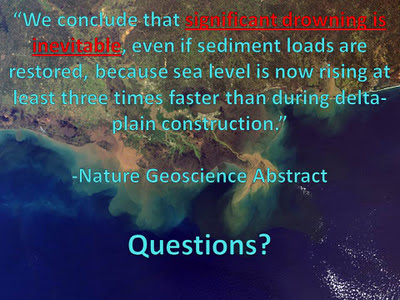 Quite an ending quote. Note that Dr. Harry Roberts might be THE foremost authority on Coastal Louisiana subsidence. He is also from Louisiana, so it's not like he's some grad student on the other side of the country throwing this out. He's right in our backyard. This paper was also published during a major push for diversions to save the coast and he went and said that diversions were nearly pointless (not what you want when you're trying to drum up political support). The paper was extremely contentious within the scientific community. 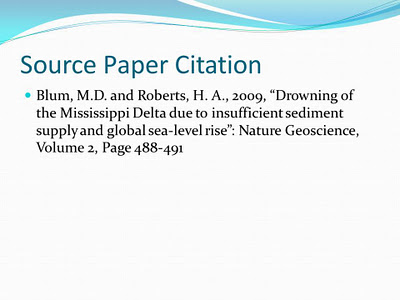