Making the Lamborghini Murciélago. Note that the Lambo factory is probably the LEAST automated you're likely to find in the Western world.

Now, take a look at a mid-evil scene: 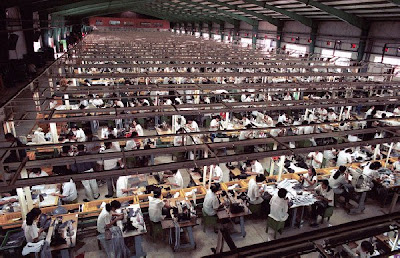 Try and count the workers. No climate control. No sprinklers/fire suppression system. Benches without backs, made of scrap wood.

Here's a interview about "The Agony and Ecstasy of Steve Jobs"

(NOTE: there is some controversy about the show, but the larger points about sweatshop practices are still valid).

I love the point Bill makes about the arrows being expensive, because that hits the nail on the head. Why should we spend money on things like CNC machines, when I can hire (and fire) 1,000's workers to do the same work for a fraction of the cost?

I will take issue with one of Daisey's points: Chinese manufacturers have to cut corners in order to come out ahead. Let's just put morality aside for a sec; almost 100% of the time, controls and automation beats out "human-wave" tactics (at least in the long run). The "human wave" approach mainly has the (significant) advantage of lower CAPEX costs, but even a slight bump in, say, transportation costs (higher fuel prices for containerships) coupled with sightly higher wages (workers only working 12 hour shifts instead of 16+)... and much of the 'advantage' of Chinese manufacturing evaporates.

NOTE- The National Geographic video of the Lambo factory doesn't like to show up in Google Reader for some reason.
Posted by Clay at 9:15 AM