Some Notes about the SELFPA-E 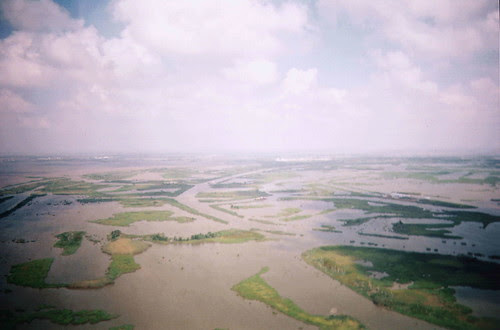 The Wagon Wheel near the mouth of the MS River.  Photo by author.

So, the Southeast Louisiana Flood Protection Agency (split into 2 branches: East and West) was created in the aftermath of Hurricane Katrina in order to do away with the incompetent, nepotistic, and unprofessional parish-level levee boards who spent more time running casinos than maintaining levees.  The history of how corrupt those levee boards were goes back well over 100 years; the original Louisiana State Lottery Company was founded to pay off levee bonds.


The SELFPA-E has fought a drawn-out battle with the Corps of Engineers on how the levees will be armored.  They fought the battle on technical merits and won a significant victory by getting the Corps to agree to geotextile armoring of the levees.  Make no mistake, that will save lives in the event of a storm.

Recently, SELFPA-E has been in the news over filing a lawsuit and Jindal has sworn to gut the board in retaliation.  So says Garrett Graves, "“I don’t see any scenario where this levee district doesn’t get gutted — or, say, ‘reformed’ — in the next legislative session.”

Garrett Graves is the chair of the state Coastal Protection Agency.  He is Jindal's point man on coastal issues.  For a little background, he doesn't have any technical background (engineering, geology, etc.), although he was a staffer in Washington DC and his father owned a local construction and engineering company.   I'd say on the whole he's done a decent job, despite the red flag of not being able to work a partial differential equation if it bit him on the ass.  Note that there is a pending public records lawsuit over his correspondence.

John Barry's credentials are impeccable.  There's really no other individual in the entire country as qualified to serve on SELFPA-E.  If you haven't read "Rising Tide" then you're really missing out on one of the greatest books in Louisiana history.  Fun fact: a Tulane donor had a copy FedEx'd to every single incoming freshmen when I went to Tulane.  They felt it was the best primer on Southeast Louisiana available.  Barry has won the Keck Award and the Abel Wolman distinguished lecturer awards from the National Academy of Sciences.

Here is a Barry OpEd in National Geographic.  Here's what could be his farewell address to the SELFPA-E: "This could be my last meeting," Barry said ...  "As you know I'm a historian, and I don't believe history happens. People make history," said Barry, author of an award-winning book, "Rising Tide," on the great Mississippi River flood of 1927. "I think this board has really made an effort to make history — and I'm not just talking about the lawsuit."

Who will we replace Barry with?  Well, so far there are two names in ring: Hassinger & George Ackel III.  Hassinger is a lawyer who already serves as the chairman of the Non-Flood Protection Asset Management Authority (running the casino, Lakefront Airport, etc. that were the Orleans Parish Levee Board legacy assets).  His appointment would signal a return to the days where board members are more concerned with lining their pockets than serving public safety.

While it's true George Ackel III ran a small construction company in the immediate aftermath of Katrina (now defunct, as far as I can tell), the first return when Googling him is horse-racing.  Yep, horse-racing.  His father was a developer in Jefferson Parish.  His grandfather was a Jefferson Parish politician who racked up $26,000 in ethics fine, the most ever in Louisiana history.

Frierson, of Citizens for 1 Greater New Orleans, and Blanco are justifiably horrified with the direction the nomination process is going.  It takes a major "Good Government" reform of the post-Katrina era and chucks it out the window.  We are still dependent on the Feds for significant actions, from finishing the post-Katrina levee rebuilding (the permanent pump stations are just beginning construction and there's still the Option 1 vs. Option 2 controversy), sediment management from upstream dams, Mississippi River water management, beneficial use of dredge spoils, ... The list goes on and on.  The optics of the moves are already terrible ("I'm sure the timing of Chevron's donation was coincidental.").  My own opinion is if this is really the direction we're going, I hereby nominate this man to be the next head of SELFPA-E:

UPDATE: James Gill hits one out of the ballpark.

UPDATE 2: In a bizarre meeting, John Barry is sacked.  The qualification committee also passed up the head of Tulane's geology department for someone with political links to Ray Nagin and Bobby Jindal.  Hmm...  Here's another letter to The Advocate by Barry.  Clancy DuBos, who endorsed Bobby Jindal for his first term, lays into the qualification committee for betraying the public trust.
Posted by Clay at 10:51 AM