Thoughts on the end of Graduate School

Is this thing still on?  So, I've been a wee bit busy lately, with work and school and family. 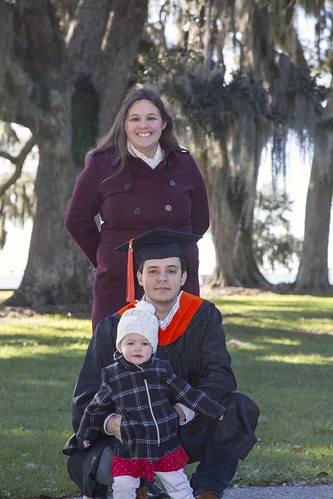 The good news is that I'm finally done with my Master's. It's been a long, difficult journey, but I'm glad I did it. I've also been blessed with tons of support from my family.

I got a Master's in a different engineering discipline (Naval Architecture and Marine Engineering), so it's taken much longer to get through, but the extra challenge was worth it.

When I started in 2011, there were many reasons I wanted to go to graduate school. In no particular order:
* I was disappointed in how things ended at Tulane. Working through your senior year in the Katrina aftermath with your professors getting laid off was no fun.
* More and more, a M.S. is the expected background for a professional engineer, especially if you're going to work on the most challenging project. See also the BS+30 possible pending requirement from ABET ( http://www.nspe.org/resources/blogs/pe-licensing-blog/why-it-important-raise-educational-bar-future-engineering ).
* In case the oil patch went to hell. All industries today are cyclical (except maybe the undertakers), but the oil patch is far more cyclical than most.  Boom times are really, really good and bust times are really, really bad. Feast or famine. In Fall 2011, oil was right at ~$100/bbl (WTI). Now, it's under $40/bbl.
* Naval Architecture is just damned interesting and I've always had a fascination with the sea.

There were some semesters that were really tough. I'd be working 2-3 days a week down at a shipyard in Morgan City, the other days working in the CBD, then driving to UNO to take 2 graduate classes. Lots of running around!

There were also some annoyances. Problems getting advising  (4000 vs 6000 level classes). UNO still had some minor damage from Katrina (K+6 years and still no working water fountains at first). The state trying everything possible to screw with the school (axing the incredibly popular Tim Ryan, then being rudderless for years, then hiring Fos, who was OK, but no Ryan, then canning Fos...). Tuition, but especially fees skyrocketing every semester.  My total out of pocket went up >10% per year each year. UNO used to be an absolute bargain, but now it's merely affordable.

Some of the cool little things:
* Taking classes beside my regulators. I got to work with folks from the USCG and MMS/BSEE.
* Learning a new discipline and also taking classes in completely new things (I took a geology class for instance). ABET rigidly dictates undergraduate curricula, but is hands off at the M.S. level, so I had a lot of freedom to pick my own way through.
* Labs are one of the things that a brick and mortar school still has over online programs.
* Chevron had a little program where they would kick some money to UNO in order to offer 1 Petroleum Engineering class per semester. UNO has wanted to start a full department, but LSU always said 'Hell No!'. Anyway, most of the course was taught by an old drilling engineer who taught from a wheelchair. The crown block on a rig fell on him when he was younger. When he talked about safety, you listened. I also tend to deal with the 'Christmas Tree' & Up at work, so learning a little about the 'Downhole Stuff' (more colorful term is commonly used) was different.
* After having to do a Lines Plan by hand, I have much more respect for the older draftsmen & engineers. Not an easy task.
* Probably my single favorite class the whole way through was Ocean & Coastal Engineering. Old professor who's very popular with the students, lots of Army Corps of Engineers manuals, and lots of jumping around. Also lots of lab work looking at modeling wave action in the small scale and Froude scaling to full scale.

Anyway, I loved it. I got out of my comfort zone, I was challenged to think, I'm glad I did it, and now I'm glad I don't have to go to class after work anymore.

I got the MS two years ago, much later in life though, and I agree that it great to be in it, and great to be done. I enjoyed he new experience of working with other adult learners with widely varying career experiences and backgrounds. I really enjoyed researching and writing a thesis, and putting myself in the academic mindset for a while.