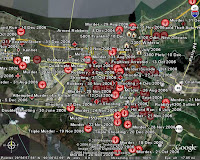 I'm working up a complete, independent set of crime statistics for the New Orleans area. I think I got almost every major crime from August 2006 to the end of the year. I got a few before that, but there's just so many, it's hard to keep up. I'm already starting on 2007, so I'll keep that up from the get go.

If you have Google Earth, you can download the above file to have a complete description of every major crime. The plain red crosses are major crimes. The crosses with the red circles behind them are murders. The houses yellow and white houses are residence robberies. The yellow post it notes are reports of criminal activity posted on NolaAgainstCrime.com. It's really an amazing tool.

Below are zoomed in screenshots of the most dangerous areas of New Orleans (Orleans and Jefferson Parish): 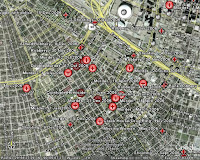 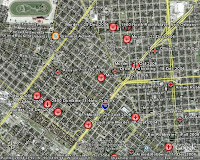 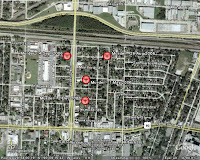 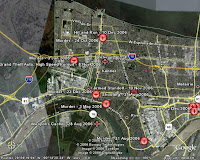 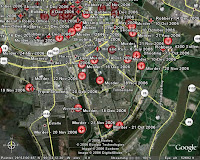 
Here's some of what I've learned thus far:
* Different crimes happen in different areas. Muggings tend to occur in the Quarter, CBD, and near Broadway (Uptown). Residence robberies tended to occur Uptown and Mid-City. Murders tended to occur in Central City, Treme, 7th Ward, Kenner, and the West Bank. Jefferson City was extremely violent, which surprised the hell out of me.
* The most dangerous street in New Orleans is Clara Street between Washington and downtown.
* There's usually a cluster of murders at the beginning of each month. I've been told by others that this is generally accredited to payday.
* Holidays are extremely dangerous (look no further than 3 murders on New Year's Eve).
* "Jack frost is the best policeman" bears some truth. Crime was almost non-existent during the past few cold snaps (or at least the more severe ones).
* The safe areas of the city include Metairie, most of Uptown and the Garden District, Algiers Point, and Lakeview. There are a lot of other areas that aren't as dangerous as you think, but I wouldn't term them as "safe."

Lost? Not sure about what neighborhood is what? Check this link out to learn about the neighborhoods of New Orleans, including their borders.

This is a continuous effort. I hope to make this a regular contribution. If you want to help out, let me know. The more people we have working on this, the better.
Posted by Clay at 7:25 PM

This is extremely cool. Thanks. I am the mother of a Loyno student and watch this closely. I have also observed the cluster of murders Uptown/CBD in the area between St. Charles and S. Clairborne, just SW of 90. It jumps out at me because I've so often stayed near there when visiting, at Le Cirque, the Maison St. Charles or the Prytania Park.

Keep it up. Thanks to Dambala for linking. Peace.

Excellent. I look forward to updates.

And I knew there was a crack house near mine.

Wow! Excellent work. Thanks so much for your efforts.

I highly recommend the download for those who have Google Earth on their computers, because it has a high level of interactivity. When you move the cursor over a particular crime indicator and click, it opens a box with a detailed description of the events.

Interesting, but the boundary lines for sections of town seem to be based more on planning district. I don't consider myself a resident of Lakeview--I'm either Parkview or Bayou St. John, and borderline Mid-Cityish given that so many renters are around--but I'm nonetheless included as being in Lakeview. Where the hell's my money?

Bayou St. John, similarly, is listed as being part of Mid-City. If it were left to itself, however, if would be on your list of the safest places around, despite the plant thefts and such.

Found you through American Zombie.

Fantastic work! This is an asset to be sure. I have instaled a link on my site and will be writing about this soon!

Interesting site.
I was thinking of trying to do a google maps application that would allow me to mark crime in NOLA. I can't find any crime info..was hoping the NOPD somehow had to post this online, where I could automatically screen scrape the values and put them on the google maps.
Do you know of anywhere on the web that the NOLA crime reports are posted online, or did you have to do this all by hand from paper records?