Today, the record for (Republican) fund raising was set. It wasn't Hillary. Mitt didn't write himself a check again (the previous record was Mitt Romney writing himself a check at the end of a long fundraising day for a total of $3.1 million). 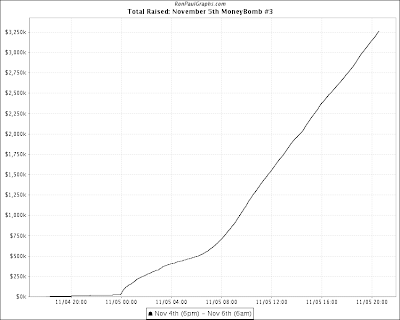 Graph from Ron Paul Graphs.com as of about 7:30 PM. I decided to post it on Blogger because his server is being overwhelmed. Pay attention to the X-axis of the graph. That's minutes and hours, not days and weeks.

Ron Paul raised $3.25 million and counting today. Someone came up with the idea in reference to Guy Fawkes Day. I was so impressed by the total, I decided to chip in myself. Yes, readers, I'm a Ron Paul fan. At least I have some local company.

Another thing, as much as I know the internet and all the wonderful things it can do, I'm still in awe of its power. It's one hell of an echo chamber, for the right message. Look at Oyster's reporting on Vitter. Look at this Ron Paul fundraising day. Look at Ashe Dambala scooping the Times-Pic on who the next person to be indicted is. None would have transpired just 10 years ago. The most amazing thing is you haven't seen nothing yet. Just imagine the potential 10 years down the line...
Posted by Clay at 7:38 PM

Where does he stand on New Orleans. How will he finance the levees?

Actually, if we go by Esther Dyson's estimates, it'll be five years to see the full power of this battle station...uhh... the internet.