The Deindustrialization of South Louisiana

The oil bust has started to level out, but we're still seeing the effects of the deindustrialization of South Louisiana, it's been touched on by The Advocate and Library Chronicles  and I'd like to take a moment to discuss it a bit further.  It's had some coverage in the media, but nobody has ever really managed to tie together a lot of threads to my liking.

Some of this is natural boom/bust cycle of mineral extraction, but lately there's been more than that.

The above graph is mining/logging (upstream oil and gas) employment in Louisiana from the Bureau of Labor Statistics.  You can see the big dropoff that led to the latest oil bust (the worst bust in at least a generation).  There's been somewhat of a boom in the downstream (refining) and midstream (pipeline) side of the oil patch, but that's been somewhat muted and hasn't completely softened the blow.  The recent runup to ~$65/bbl also hasn't done a lot to revive job growth.

Louisiana used to also have a more diverse group of manufacturers.  For example, Michoud used to crank out external tanks for the Space Shuttle program.


As the shuttle program slowed to a crawl after the Columbia explosion and eventually ended, Michoud went into a semi-dormant state.  It's not shuttered; they still make several things at Michoud (structural components for the F-35, some big LNG tanks, and components of the delayed Space Launch System [SLS] program).  Michoud is a special facility; if you want to send something big into space and launch it from the Cape, you pretty much have to build it at Michoud so a renaissance someday under, say, SpaceX isn't out of the question.

Louisiana's largest industrial employer up until very recently was Avondale Shipyard.  I recently read a book, The Yard, by Michael Sanders, that was primarily about Bath Iron Works, but talked quite a bit about how healthy Avondale  at that time (2001)  in comparison to the other Navy shipyards.  I half expected the book to end with the closure of Bath and success of Avondale.  Avondale had the cheapest labor pool of any of the major naval shipyards, had large facilities, and out of all the naval shipyards had the best track record of doing commercial/nongovernmental work.  One would think that those advantages would keep the yard open.

Unfortunately, as we all know Avondale Shipyard closed.  There's still a very small amount of engineering and drafting work being done at Avondale, but it's pretty much closed.  Recently, the floating drydock was towed away (for scrapping?) in South America: 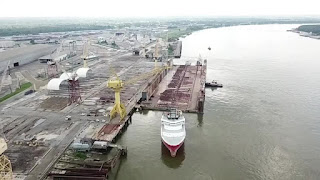 Without that floating drydock, Avondale will never be a real shipyard again.  That drydock has a side that drops away and allows for large vessels to be onloaded, floated out, and gently launched in the water.  Launching a big ship the old fashioned way (via a Ways) is too risky and too complicated to do for large vessels in as tight and congested a waterway as the Mississippi.  Building a new drydock would cost at least $50m on top of acquisition costs for the shipyard.  I heard a rumor Huntington Ingalls is asking $40m for the site; the Port of New Orleans, one of the few potential buyers heard that price and laughed.

Why did Avondale close?  There's always a plethora of reasons for something big like this (many detailed here), but a few I'll touch on are first off, the general downturn in naval shipbuilding (after the buildup of the 80's combined with the demise of the Soviet Union, just not as much of a need), the demise of the domestic shipbuilding industry after the elimination of Tittle XI of Commercial Differential Subsidies in 1981 (more here and here in Chapter 10 of "Staying Afloat"), the failure to adopt more modern construction techniques (Avondale was actually the first US shipyard to install an automated panel-line welder, but later lagged in the adoption of "Group Technology" shipbuilding practices), and the consolidation of the industry.  That last one is the final nail in the coffin, as Avondale and Pascagoula were both owned by Newport News Shipbuilding [Northrup Grumman] and as there was less work to go around, the corporate parent picked which child it wanted to live and which to let whither away.

Pascagoula also had an added advantage in that last fight: Pascagoula was awarded nearly $2B to rebuild after Hurricane Katrina; Avondale didn't get such an award [but did have significant disruption to its workforce housing in Katrina].  Taxpayers basically bought Huntington Ingalls a brand new shipyard.  If you could only keep one shipyard open, which would you choose: the brand new, modern, efficient one or the old one that has airdraft restrictions (bridge height)?  There was a GAO audit against Pascagoula and they didn't get to keep all of the $2B, but they kept enough to make the difference.

The other major industrial employer in South Louisiana that used to employ nearly as many as Avondale (at least when times were good) was McDermott's large fabrication facility in Amelia, Louisiana.  The Amelia facility started in 1956 and went on to build some of the largest and most complicated offshore structures of anyplace on earth.  It actually outgrew its first location on Bayou Beouf and moved further down the bayou.  When times boomed, it'd be end to end jackets spread over hundreds of acres with thousands of workers.

Being attached to a highly cyclic industry, the workforce size rose and plunged with the price per barrel, but McDermott seemed to hold onto enough talent during the busts to be the quickest on their feet when the boom returned.  One example of how I've heard is the McDermott side of the story of the American Queen.  Everyone hated working on the American Queen.  The vessel was actually built mostly on spec by McDermott without a really firm contract up front.  The fab yard never really wanted to become a shipyard (oil patch and shipbuilding being dissimilar enough), but the management knew a boom would later come and wanted to hold onto as many hands as possible.  Suppliers got pushed around and annoyed, workers were ridden hard, but eventually the ship was finished in 1995, just in time to clear the yard for Shell's series of TLP's mostly built at McDermott (whose hulls were built overseas and generally integrated to the Topsides elsewhere).  While it was a rough project that McDermott didn't make a profit on, the boat filled timesheets and a lot of folks learned good lessons from that project.  The American Queen didn't do well under the first operator, who went into bankruptcy, but the new owner is doing quite well, so I've heard.  It seems that American tourists are too terrified of getting beheaded by ISIS to go on Danube cruises and are sticking closer to home.

So, it came as some surprise when lots of rumors of the Amelia Fab yard's closure started to come out in the early 2010's.  Oil prices were still well over $100/Bbl.  But, McDermott, who used to be the top name in offshore fabrication had been slowly supplanted by Kiewitt Offshore Services (KOS) in Ingleside, TX.


One of Kiewitt's keys was the HLD (Heavy Lifting Device): 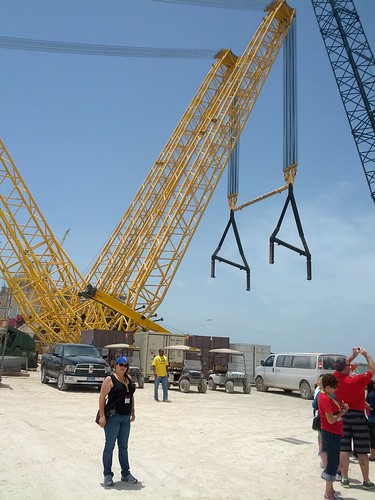 Engineers should never be allowed to name anything because HLD is a horrible name; the largest crane in the Western Hemisphere should have a cooler name than that.  The HLD allowed the lifting of bigger, more complete modules for deeper water, more complicated platforms.  One story I've heard is that the HLD was actually a "design in a drawer" that originated with McDermott engineers, but management didn't have the vision to see the market and balked at the pricetag. Those engineers quit, convinced Kiewitt to enter the market with a substantially lower, innovative bid that beat McDermott to win one project and Bullwinkle Constructors LLC (a limited liability corporation Kiewitt partnered in) was later converted into KOS.

McDermott Amelia's days were numbered as the rumors turned out to be true.  McDermott shifted its operations to Altamira Mexico, where they've hired a thousand workers this year, even in a down market.  Their New Orleans engineering office was also shuttered as everything consolidated to Houston.

The upswing of a sustained oil boom are over.  The state now has a hangover with massive job loses (in fact, Houma-Thibodaux currently has the fourth most depressed economy in the nation (ranked by census tract), TOPS perennially teetering on insolvency and the state's budget is in shambles.  What comes next?  Does everyone just pack up for Houston?  I sure as hell hope not.  What comes next is we get up, figure out what comes next, and do it.

Update: Chouest predicts 2018 will be yet another slow year. Chouest is one of the last medium sized industrial manufacturers left in Louisiana.

Upperdate: Minor corrections for clarity and spelling.
Posted by Clay at 10:05 PM