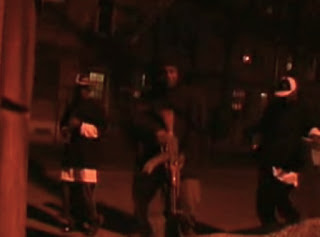 I live on the north side of the Quarter, near Rampart Street. There have been nights when I've gone to bed to the sound of assault weapons. The sound is unmistakable. The rate of fire is slow enough where you can almost count the rounds as their fired. THIS IN AMERICA, NOT BAHGDAD!!! WHAT THE HELL IS WRONG WITH THIS CITY! On the street, AK-47's are called "choppa's." They go for $400-$500. There's an ample supply of them, too. My guess would be smuggled into the Port of New Orleans in containers from Latin America or China. Don't really have any evidence to back up that last part, but it's my guess. Assault rifles rip right through the kevlar vests police wear. The rounds go on and on and kill innocent civilians. They are one of the most dangerous tools in the hands of the city's criminals. 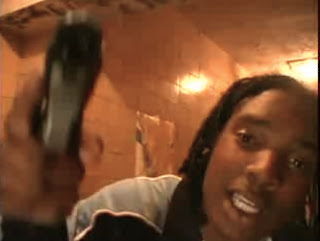 Those that use "choppa's" like to call themselves "gangsta's." They're human garbage, if you ask me. They don't rob from the rich to give to the poor. They prey on the weak and helpless. They are a plague upon this city.1

Watch the amateur video of "the gangsta life" There's one part of this video I'd find interesting. They bitch and moan about the NOPD... including when they're holding up an AK-47. A criminal complaining about being hassled by NOPD while holding and AK-47 sounds like a ringing endorsement of the department to me.

New Orleans Exposed: A professional video that similar to above, but goes way too far by glorifying the lifestyle.

Oh yeah, and a bunch of NOPD are being brought up on charges for the Danzinger Bridge incident. Another black eye for the NOPD. I wasn't there, so I don't know what happened, but I know the police are the thin blue line that separates us from the garbage. Also, no matter how bad they might be, they're far better than they were in the pre-Pennington days, so any reference to their history is really unfair.

1Technically, they aren't gangsters because New Orleans doesn't have any gangs. New Orleans has never really had gangs. Recently, the Latin Kings have tried to move in, but still there isn't much of a presence. There was one New Orleans gang, the Metz Gang, but they disintegrated, leaving only a mass of independent, small-time thugs you see today.
Posted by Clay at 8:28 PM