Every GI Joe cartoon I saw when I was a kid ended with the quote: "Because knowing is half the battle."

If we're ever going to get a handle of crime in the city, we're going to need accurate statistics of what's going on and where's it's going on. That's the Pennington Plan. He introduced and pushed CompStat (computerized crime tracking and mapping software) on the department.

This is what the NOPD is passing off for crime statistics, now. One is months out of date, the other is horribly incomplete.

And then there's the question of accuracy. New Orleans hasn't had an independantly audited set of crime statistics since 2002 (hey, wasn't there a guy named Pennington running for mayor that year?). It's rumored that crimes go unreported or downgraded regularly. How bad is it? Well, nobody really knows for sure, but I can give on example. A while ago, there was a drive-by shooting on Frenchman Street right in front of the Praline Connection. The victim died a week later in the hospital. Because he died later, the perp (if they catch him) will only be charged with attempted murder or even just assault with a deadly weapon.

I'm working in Google Earth to create a map of all major crimes in New Orleans. Here's what I have so far: 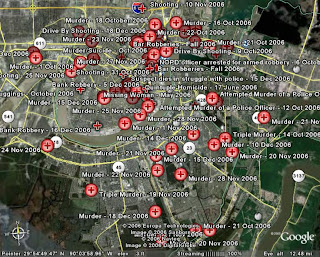 I'm already starting to see some real patterns. I want to save my main findings for later, but I'm astonished at how many people survive getting shot and how many stabbings are "domestic" crimes.
Posted by Clay at 6:40 PM