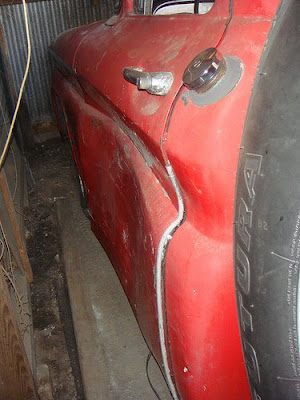 So, I've decided to concentrate on getting the truck streetworthy and part of that will be replacing the doors. I have a good passenger door, but the question has been, 'what to do with the driver's door?'

I'm going to try to clean the driver's door up as much as possible, then use a phosphoric acid-based spray to convert the rust, then pain on top of that. Given how rusty the door is, I'm not expecting it to be perfect, but if I can get the doors on while I look for a better replacement, that will do for now. 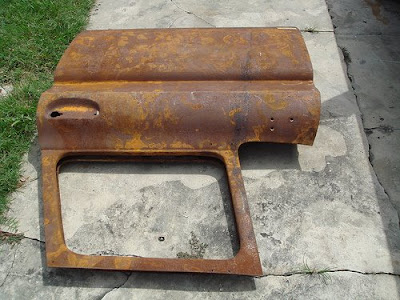 As rusty as the door looks, it's actually structurally solid, thanks to the incredible thickness of the sheet metal used. The rust is really just cosmetic. Started sanding it with some 60-grit sandpaper. If I had a full-sized sandblaster, this would take 5 minutes. 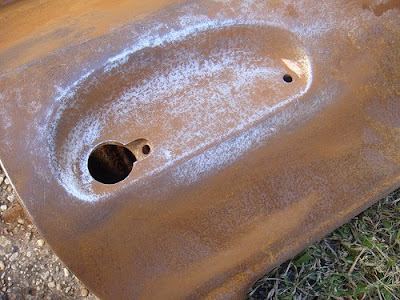 After some sanding. Fresh Metal starting to show through.
Lots of rust came off. Looks a lot better. 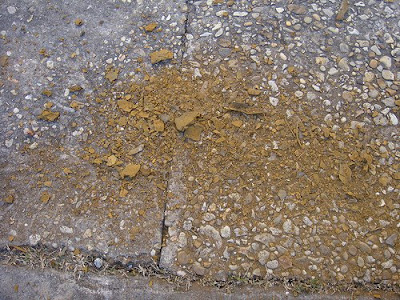 This door went underwater in Chalmette in Katrina. There's still a residue of Katrina muck inside.

The rust (iron oxide) is converted to Iron Phosphate. The spray I used actually does a few other things on the side, like convert the red rust (Fe2O3) to black rust (Fe3O4, aka- millscale) and draw water out of the metal. 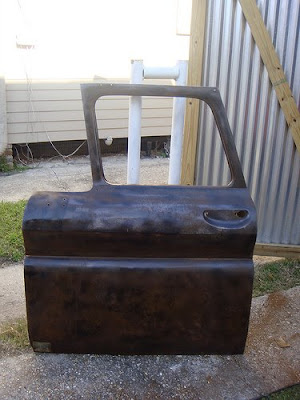 After two coats of phosphoric acid.

We'll see how it works. I've left it to cure overnight. I'll paint on top of it to protect it and see what happens.

Also on rust chronicles.
Posted by Clay at 8:48 AM