A peak inside the biggest industry in the world...

I work out at Mars sometimes. I've been out there a few times. It's one of dozens of major platforms in the Gulf. Oh yeah, rigs are for drilling and platforms are for production. Don't ever call a platform a rig. Some platforms have rigs on them, but not all. Anyway, there are HUNDREDS of platforms all over the Gulf. Here's a great series of posters of offshore oil production. This one in particular is useful. It's the lease map of the Gulf of Mexico. It should be posted in every public building in Louisiana, in my opinion. People have no idea how much infrastructure there is offshore, especially on the shelf. 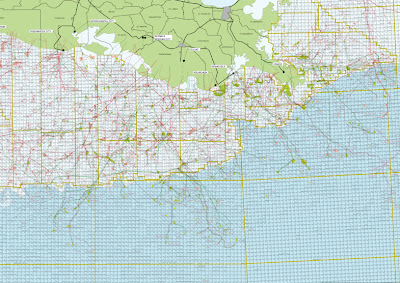 Here's a quick sample of what it looks like. 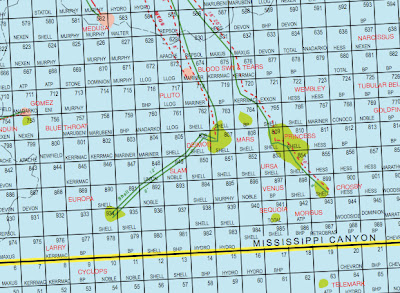 Here are a couple of great articles on the development of Mars.

Here's a sonar image of the reservoir. This is pretty much all the poor geologists have to go on to find oil. The only surefire way to find oil is by drilling. Some of these holes cost a BILLION dollars to drill. Back in the day, 1 in 7 odds were considered "good." Today, even with the best technology, the best the geologists can do is give you 1 in 3 odds. And you have to bet a billion dollars on their guess.

I read these articles about the geologists and accountants worrying about whether or not Mars would break even and have to hold back laughter. Mars was developed when oil prices were very low- hovering just below $20 a barrel. Now, Mars might be the most profitable field in the entire Gulf of Mexico. It's a elephant (oil-speak for big field) and the platform, by deepwater standards, is actually somewhat small. Ursa, Mars's twin sister, is much larger and has a lot more equipment to separate the oil.

Anyway, Katrina hit and Mars, the pride of Shell's fleet, took a hell of a hit. 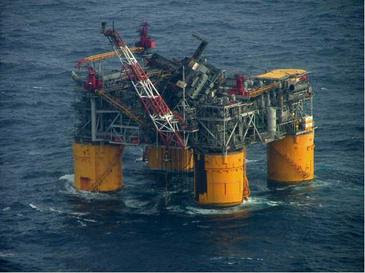 This is what it looked like afterwards. The rig (the thing that does the drilling) collapsed. The rig is the size of a 10-story building and is designed to crawl over the deck to drill in different areas. Imagine moving a 10 story skyscraper on Podras, much less moving it in the middle of the Gulf! Anyway, when Katrina hit, the clamps that hold the rig down failed and the rig fell onto the platform. Thankfully, the platform was over engineered like hell and the damage was only moderate.

I graduated from Tulane on the tail end of the Katrina repairs. Prior to my graduation, the Mars Recovery Team, a close knit group of Shell employees and subcontractors, got Mars back up and running in a matter of months. In less than a year, the plaform was producing 20% more oil than when Katrina hit. Shell and the subcontractors work hand-in-glove. One of the most surprising things I've learned working offshore is virtually all the real work is done by subcontractors. Shell employees just sort of monitor things. Only about, say, 20% of the personnel offshore are Shell. The rest are subcontractors.

Anyway, many of these guys have been working together for years, so everybody had an idea who would handle what before a single meeting was held. The long, closeknit relationship between engineers, workers, and Shell was THE factor in getting things back up and running so fast (that and throwing wads of cash at the problem).

They lifted the collapsed rig off with a huge barge bigger than Mars. Recently, they've replaced the rig on Mars with the same rig that failed. The rig has been GREATLY reinforced since then, obviously.

Anyway, that's a little look into my world. I can only delve into so much, being a subcontractor and all. Because of all the bad press right now for the oil industry, they don't like people talking about their jobs too much to the general public. If you ask me, they should be exposing themselves to as much as possible.

Funny, but I think a lot of people's views on the oil industry are about 20-50 years behind the reality of it...Everyone is so inundated with the crusades for the next big viable energy source such that the real workings of the oil bidnesses fall by the wayside. Or, they head out to sea, I guess. 8-)

Houston's Museum of Natural Science had many, many exhibits devoted to oil drilling and production. Now I'm wondering if it has changed much in 20 years.

I was at the Museum of Natural Science exhibit not to long ago, and the offshore component is only touched on at the end. It's a pity, the incredible engineering feats of the offshore world could fill their own exhibit. But then, no one's ponied up the donation to make it happen.

The oil production industry is fascinating, says the wife of Production P.E. heh.

What burns me is people who have no idea of the technology & hard work involved in drilling and production that want to point fingers at "big oil". Guess what. Big oil is made up of lots and lots of average people just like them and the decisions they make represent billions of dollars AND the safety of workers on the platforms. P.E.'s take their jobs very seriously. It's also a highly regulated industry despite what people think.

What we need to learn from the oil industry is their approach to risk. They fully evaluate the risks of putting production platforms in the hostile waters of the Gulf, and plan appropriately. They don't overbuild so much as build for resilience to extreme events. I doubt anything the Gulf is designed for the 100-year storm--they have much higher standards. They also know the importance of evacuation. Let's hope the general public has learned that lesson.

Thank you for showing us the hard work and accomplishments of engineers in the oil business. They prove that where there is a will, there is a way.

"People have no idea how much infrastructure there is offshore, especially on the shelf."

Thanks for the look into your world, Clay. Great post.

I've worked the Mars-Ursa basin through my entire Shell geophysical career (almost 5 years) and should say that I still have no clue what you guys do on topsides.

Then again, all of the facilities and engineers and driller refer to my work as impenetrable math, physics and squiggly lines.

Oh, and we have MUCH better seismic than that to work with now! Another big expenditure is one seismic acquisition after another. Thank goodness we're graduating to ocean bottom cables now.

Also, don't laugh about the economics of the Mars-Ursa basin especially given that the easy oil has been developed. It is the most profitable field in the entire GoM, but the cost of steel and production increases exponentially by the minute to the point that we would lose money on the venture. Also do not forget sub-salt when going deeper and it gets much, much harder.

I'm very proud of how quickly and efficiently Shell put Mars back on production.

Talk about press scrutiny - this is why I don't talk about Shell and my work here on my own blog very much at all, I mean other than obvious privacy requirements. Otherwise, I'd have two posts a day about some cool technology or the other. It is a very exciting field to be in.

Topsides, we basically fix stuff that's broken, is about to break, or someone at Shell thinks it's broken. There's always something breaking, so it's a never-ending job. That's the long and the short of it.

All of that well management stuff is way above my pay grade. What I have seen of it seems like voodoo to me. Way too many variables to account for for it to be a science, IMHO.

I've got to be even more careful about what I post, being a subcontractor and all.

Everything you've posted so far is public knowledge, but corporate intelligence is very crucial to company success. Again, I'd love to talk about what I do everyday because it's fascinating and extremely cutting edge, and even if the technology is publicly know, don't wish the world to know what we pursue.

That last part was supposed to read: however, even if the technology is publicly known, I don't wish the world to know what we pursue.